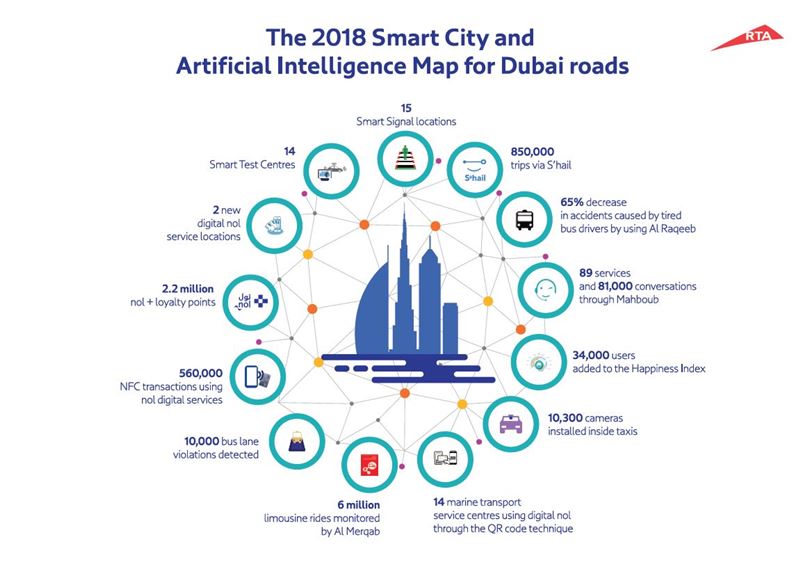 "RTA supports the transformation of Dubai into a smart city to provide happiness and luxurious living to residents through offering world-class standard services. Given the importance of smart mobility to the concept of smart cities, RTA has prioritised the convenience and welfare of people when planning and constructing its projects. It also focused on utilising smart technologies in delivering services to clients," said Mattar Al Tayer, Director-General and Chairman of the Board of Executive Directors of RTA.

RTA has accomplished a host of smart projects and initiatives such as Raqeeb system, which monitors the condition of 300 bus drivers. The system contributed to reducing fatigue-related accidents by 65%. The daily rate of exhaustion or lack of attentiveness cases detected by the system ranged from 5 to 8 cases. RTA has introduced the system to two of Dubai Trams on a trial base.

RTA has also completed the installation of surveillance cameras in more than 10,000 taxis in Dubai. The cameras contributed to pushing customers satisfaction rating to as much as 83%.

"Projects completed include Al Merqab system; which streamlines and monitors the limousine and e-Hail companies. The system offers a solution to the key challenges encountered relating to the streamlining and governance of e-Hail companies. More than 5200 devices have been installed in limos with 114 operators, and all e-Hail companies (Uber and Careem) have been linked to the system. Al Merqab monitors about six million journeys," explained Al Tayer.

RTA has completed Phase III of the Automated System for Monitoring Dedicated Bus Lanes, which has reduced the number of vehicles violating the bus lane by 83% and improved bus on-time arrival by 20%. Projects include the smart pedestrian signalling system at 15 locations. Through smart sensors, the system increases or abolishes the time allocated to pedestrians, based on the people movement detected by the system. Projects include the smart parking booking system enabling the client to book parking before arrival to the intended destination.

It has also introduced the field inspection of trucks unit. It is a smart vehicle fitted with smart solutions to support the monitoring and inspection of heavy vehicles. The process involves a mobile monitoring centre to target hotspots witnessing frequent offences and the provision of vehicles inspection robot.

"RTA has also accomplished the smart yard for testing trainee drivers in 14 locations. Drivers testing vehicles have been transformed into smart vehicles capable of detecting the testing manoeuvres and measuring the driver’s response to each of them. The yard is fitted with high-power cameras and sensors connected to a central processor capable of gathering information and working out errors automatically. The system automatically figures out if the test result is Fail or Pass," said Al Tayer.

RTA has completed a new phase in the deployment of a new wave of advanced technologies at the Enterprise Command and Control Centre (EC3).

In 2018, the Centre monitored more than 170 events across the Emirate to ensure the smooth mobility during events along with the response time to emergency cases related to mobility. Through the adoption of artificial intelligence, the Centre processes big data amounting to 75 million mobility data-entry per day.