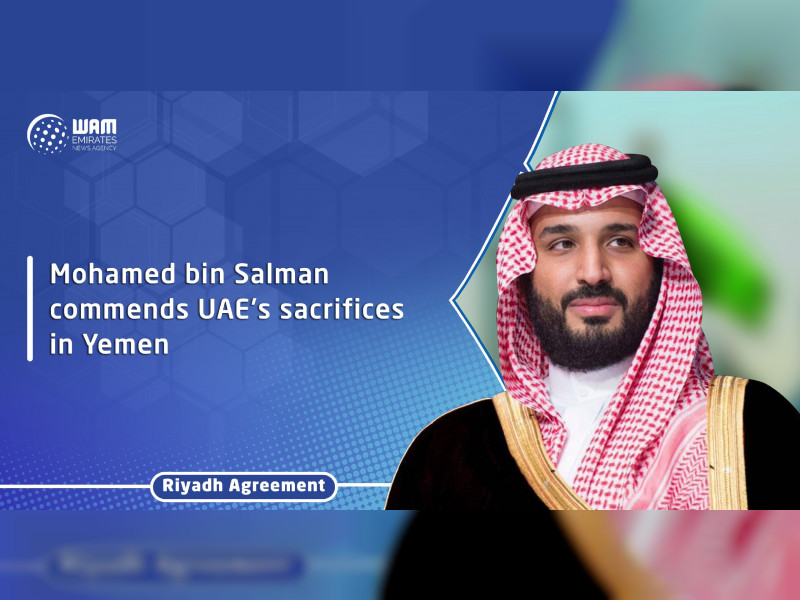 In his speech during the signing of the Riyadh Agreement between the Yemeni legitimate Government and the Southern Transitional Council today, the Saudi Crown Prince said: "We are pleased to welcome you on this blissful day which brings Yemenis together in the Kingdom of Saudi Arabia which has been used since the era of the Founder King Abdulaziz, to standing by Yemen, ensuring its stability and relentlessly supporting its prosperity out of confidence in the wisdom of its people and their determination to survive all challenges."

The Saudi Crown Prince underlined the Kingdom's supportive stance of Yemenis with whom he said Saudi Arabia is inseparably bound by strong religious, neighborly and kinship ties.

"In continuation of this supportive stance for Yemenis, the Custodian of the Two Holy Mosques King Salman bin Abdulaziz Al Saud of Saudi Arabia directed to exert all possible efforts to mend fences between Yemeni brethren," he added.

The Saudi Crown Prince commended the positive response of Yemeni President Abdrabu Mansour and the Southern Transitional Council to the Kingdom's call for dialogue, which resulted in forging the Riyadh Agreement that he hoped would mark a fresh start for a new phase of stability and development in Yemen.

"The Kingdom will always be standing by you," he addressed the Yemenis.

"Our prime concern since the onset of the Yemeni crisis has been to stand by the brotherly people of Yemen in response to a request made by the legitimate President of Yemen. Our stance has stemmed from the self-defence principle to put an end to all external interferences aimed at creating a new fact by force on the ground and staging a coup against the state's legitimate institutions while posing menacing threats to the security of Yemen's neighbours and the region's water passages before the very eyes of the entire world.'' "We have managed to achieve a lot for Yemen and the for the security of the region. We have provided a lot of support and assistance to Yemeni people out of our feelings of love and fraternity. We will continue to work for helping Yemenis realise their ambitions and restore their State by trying to reach a political solution to the crisis according to the three references (the Gulf Initiative, national dialogue outcomes and United Nations Security Council Resolution 2216) in order to foil the attempts of all those who are not working for the common good of the Yemeni people."

He doubled on the Kingdom's affirmation of the sincere intention and goodwill behind the Riyadh Agreement, which he said, is aimed at setting the national interests of Yemeni people over all sinister considerations and attempts to promote sectarianism, chaos and instability in Yemen.

"The Riyadh Agreement will - God Willing - achieve the ambitions of the Yemeni people and will open up the door for wider understandings between Yemeni parties to reach a political solution to the Yemeni crisis in order to ultimately protect Yemen against all those who are not working for the common good of all segments of Yemeni society and the rest of Arab peoples." he concluded.