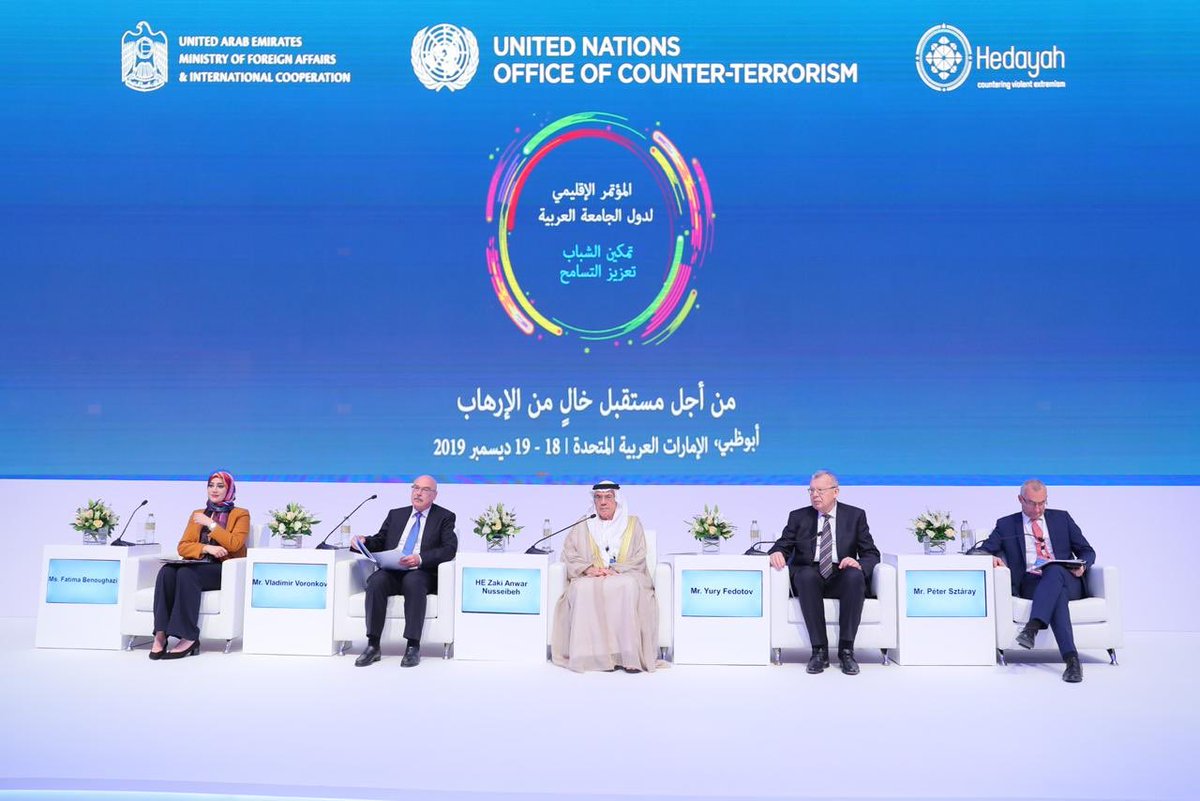 The conference provides an opportunity to discuss initiatives and action plans to strengthen resilience against radicalisation leading to terrorism, with a focus on youth empowerment and tolerance at the national and regional levels. It brings together over 300 representatives from League of Arab States countries, and several from Africa, Asia, the Americas, and Europe, as well as civil society organisations, youth representatives, religious and interfaith actors, and leading think tanks, to exchange views and share experiences from the Middle East and North Africa.

Opening the conference, Zaki Nusseibeh, Minister of State, said, "We must not overlook the important role of civil society institutions in empowering youth and promoting tolerance to prevent and combat extremism and terrorism. In this context, we encourage enhanced partnerships and cooperation with these institutions to leverage their expertise in the development and implementation of national and regional plans in the prevention of extremism and combating of terrorism."

The United Nations Under-Secretary-General for Counter-Terrorism, Vladimir Voronkov, welcomed cooperation with the UAE and Hedayah on this important topic. "I hope this conference provides a platform to identify ways and opportunities to strengthen cooperation among Arab League Member States and explore how we at the United Nations can further support you in empowering youth and promoting tolerance as part of your prevention efforts," he stated. He also emphasised the vital role of civil society organisations in building social cohesion and laying the groundwork to prevent terrorist recruitment while uniting societies after terror attacks.

The conference includes three plenary thematic sessions, including the High-Level Panel on Empowering Youth for Preventing and Countering Violent Extremism Conducive to Terrorism, PCVE, the High-Level Panel on Promoting Tolerance for PCVE, and the Youth Circle on enhancing partnerships between governments, youth, community and religious actors to promote the values of tolerance and strengthen resilience to terrorist narratives.

In addition, a one-day workshop led by regional and international civil society organizations was held on 17 December. The workshop, which was opened by Under-Secretary-General Voronkov and Zaki Nusseibeh, aimed to enable grassroots actors to exchange views on the conference’s agenda, with a focus on youth, community engagement, empowerment, and resilience. The substance of their discussions fed into the larger regional conference.

Ahmed Al Qasimi, Executive Director of Hedayah, said, "Violent extremism is a global dilemma that requires multi-lateral approaches. The key elements behind developing a holistic and robust approach in countering violent extremism covered during this conference entails engagement with civil society and local communities, empowerment and the inclusion of youth, and echoing the values of tolerance and peaceful coexistence."

The conference is the sixth in a series of regional conferences to be held around the United Nations High-Level Conference for Heads of Counter-Terrorism Agencies of Member States, which was first convened in New York in June 2018 by Secretary-General Antonio Guterres to strengthen international cooperation to combat the evolving threat of terrorism.

The United Nations Office of Counter-Terrorism is partnering with Member States in different regions to co-organise these conferences, which aim to strengthen regional counterterror cooperation and prevent violent extremism conducive to terrorism. The outcomes and recommendations of these conferences will feed into the second High-level Conference of Heads of Counter-Terrorism Agencies of Member States, which will take place in New York in July 2020.