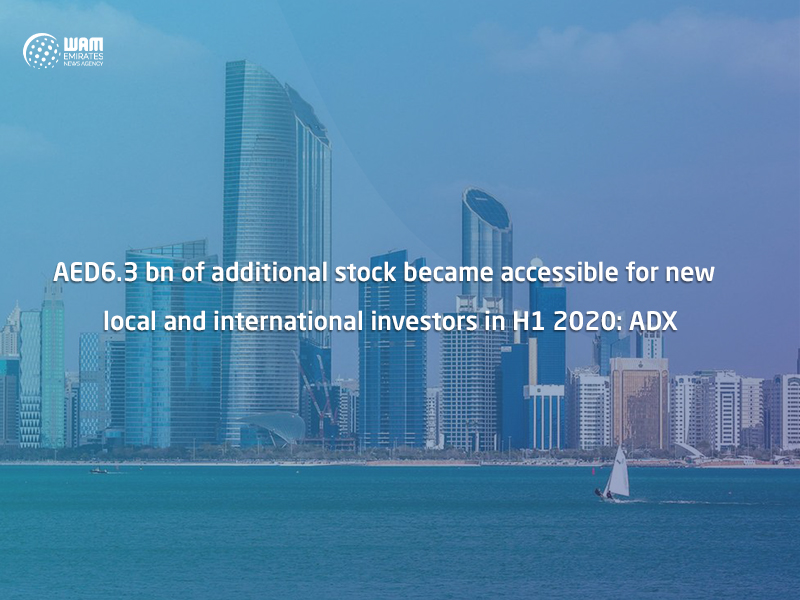 ABU DHABI, 16th July, 2020 (WAM) -- In the first half of 2020, AED6.3 billion of additional stock became accessible for a new group of both local and international investors, creating further scope for increased trading and liquidity, Abu Dhabi Securities Exchange, ADX, revealed in its report on its performance for the six months ending 30th June 2020.

The report focuses on the exchange’s efforts in supporting Abu Dhabi’s economy through the development of its capital markets, building a strong platform for growth and foreign investment as the easing of COVID-19 restrictions continues.

Khaleefa Al Mansouri, ADX Chief Executive, said, "The whole of Abu Dhabi has collaborated to ensure that the emirate emerges from the COVID-19 crisis well placed to resume its long term growth trajectory. ADX has coordinated closely with its listed companies and other stakeholders to build a robust, modern and increasingly international capital market, an essential pillar of any economy. Especially given the obvious challenges, our performance demonstrates that ADX is delivering on its key strategic objective of becoming more liquid and more accessible to a broader mix of investors."

"This means that since the end of 2019, an additional AED6.3 billion of stock in these companies is currently accessible to foreign investors, across three separate sectors," ADX said, adding that in total, 55 companies on the exchange are currently accessible to foreign investors, representing 80 percent of the total exchange.

In addition, on 1st July 2020, Abu Dhabi National Energy Company (ADX: TAQA) completed the merger of its energy and water assets with certain of Abu Dhabi Power’s. The transaction added more than AED100 billion to ADX’s total market capitalisation, increasing it by 20 percent to AED607 billion at time of writing. TAQA is now one of the largest companies on ADX.

ADX also saw increased levels of interest from the expatriate investment community, with a 25 percent increase in the number of non-UAE nationals registering to invest in ADX compared to H1 2019.

The largest proportion of expatriate investors by country were from the UK, who traded AED5.2 billion of shares in the period, followed by those from the US (AED4.1 billion) and then Luxembourg (AED1.2 billion.) During the period, 1,723 new investors traded on ADX for the first time, of which 1,497 (87 percent) came from the retail community, further evidence of increased interest from a broader range of investors and providing a further boost to liquidity.

Looking ahead, Khaleefa Al Mansouri concluded, "We can’t predict when the world will turn the corner, but there are significant grounds for optimism in Abu Dhabi and at ADX. Our performance so far this year shows that we are as well placed as any exchange in the world to enable investors to take advantage of improving market conditions, by increasing access, liquidity and the range of products available, an essential component of a healthy and growing economy. We expect these to include ETFs and REITs, as well as others, on a sophisticated and innovative digital platform, and with greater levels of transparency. We, therefore, remain confident of meeting our objective of being "Your Market of Choice", one that shapes the 20s, and that supports the achievement of Abu Dhabi’s strategic plans for a diversified economy and a sustainable future."