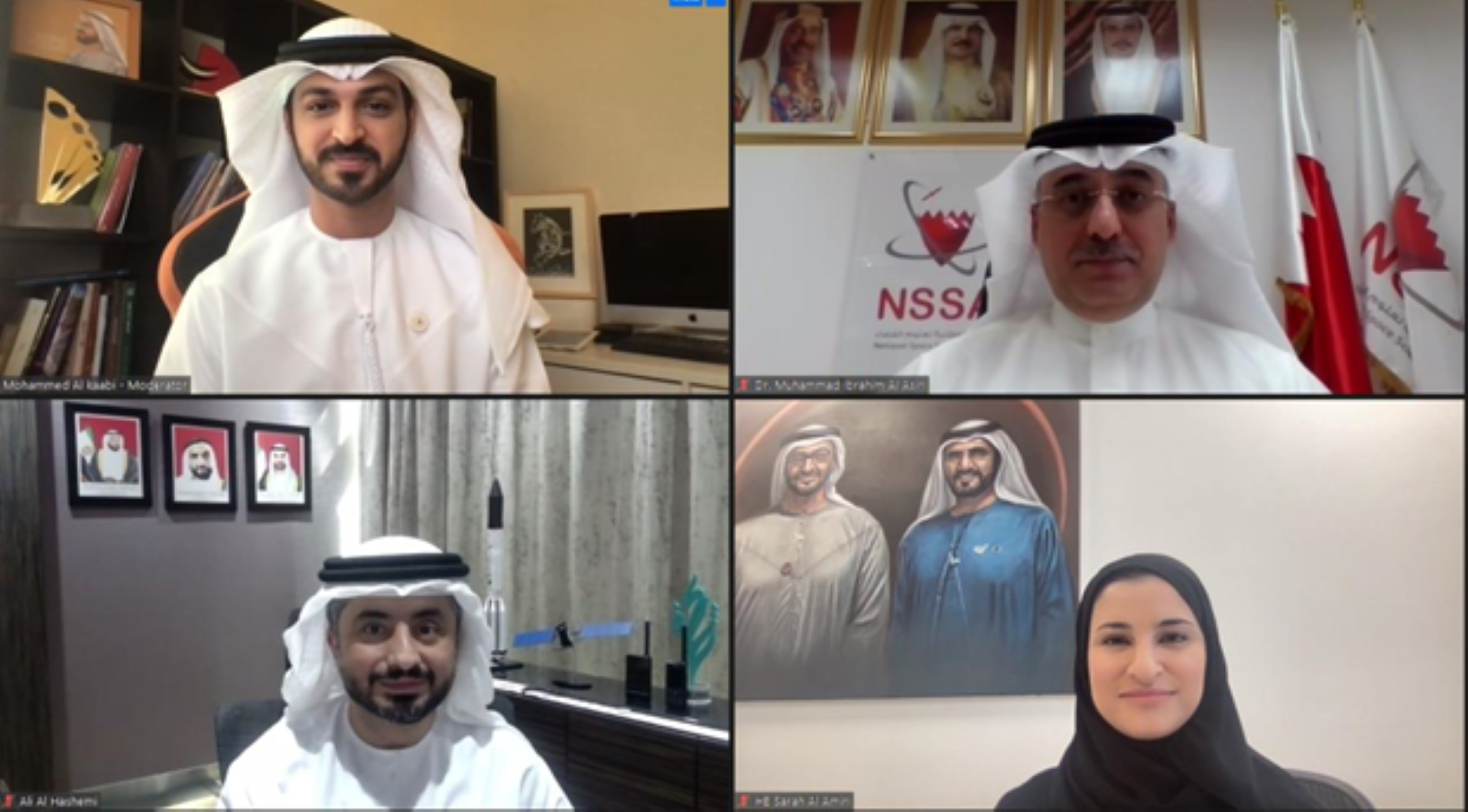 DUBAI, 14th October, 2021 (WAM) -- The third virtual session in a series following the announcement of the Projects of the 50 took place today, discussing investment opportunities in the space projects and the prospects for promoting the development of advanced technologies.

The session coincided with the UAE’s recent announcement to explore Venus and the Asteroid Belt in a 3.6-billion-kilometre journey into deep space – just the fourth of its kind to have been launched globally.

The latest space mission was launched by the UAE Government on October 5, 2021 as part of the "Projects of the 50", the new national agenda that establishes a new development cycle in a number of economic sectors.

The virtual session focused on the outstanding opportunities that the UAE provides for scientific talents, emerging projects and private-sector companies specializing in space technologies, industries and research. It was attended by Sarah bint Yousif Al Amiri, Minister of State for Advanced Sciences, and Chairman of the Board of Directors of the Emirates Space Agency; Dr. Mohammed Ibrahim Al Asiri, CEO of the National Space Science Authority in the Kingdom of Bahrain; and Ali Al Hashimi, CEO of Al Yah Satellite Communications Company (Yahsat).

The session, which was moderated by Dubai TV presenter Mohammed Al-Kaabi, revealed significant details about the new Emirati space mission. In addition to reaching the planet Venus, the project also seeks to land the probe on an asteroid located 560 million kilometres from Earth, and the discussion provided information on the advanced technologies, software, innovation and scientific expertise required to implement it – and any subsequent missions the UAE will launch in the future.

The session also discussed the effect of space projects on investments in vital economic sectors such as communications and information technology, applications of the Fourth Industrial Revolution, the Internet of Things, big data analysis, information storage, and the development of renewable and sustainable energy technologies.

Sarah bint Youssef Al Amiri, Minister of State for Advanced Technology and President of the UAE Space Agency, said that the UAE mission to explore Venus and the Asteroid Belt is a milestone in the UAE space sector.

Al Amiri added that it will help attract local and regional investments as well as talents specialised in advanced technology and space industries. This will consolidate the UAE’s position as a destination for promising emerging projects in space technologies.

Al Amiri stressed the importance of the new project in sustaining the growth of the space sector in the GCC, which has made a positive impact on various economic sectors. Space technologies and sciences generated by engineers, scientists and innovators during the UAE’s ambitious space missions, will contribute to improving the quality of life in future cities and societies around the world.

She commended the efforts and initiatives of the Kingdom of Bahrain in empowering young talent and emerging projects in advanced technology sectors for the space sector, and for joining the Arab Group for Space Cooperation, which confirms the keenness of its leadership to invest in space and future sciences.

Dr. Mohammed Ibrahim Al-Asiri, CEO of the National Space Science Authority in the Kingdom of Bahrain, stressed that the royal vision for the Kingdom focuses on investing in space and future sciences as a means of enhancing sustainable economic development. It is keen to empower talents, expertise and promising ideas in the space sector, to enhance the presence of youth and women in such fields, and to consolidate the principle of international cooperation in space exploration and related technologies in order to serve humanity.

He noted that the NSSA comprises talented Bahraini youth, with women making up more than 60 percent of the workforce, of which more than 66 percent hold leadership roles.

Dr. Al-Asiri called attention to the UAE space sector, which has achieved remarkable accomplishments over the past few years and represents a significant addition to the region’s space industry that will benefit many economic and scientific sectors in the future.

Dr. Al-Asiri pointed out that Bahrain possesses a wealth of advanced scientific talent that can elevate the space sector in the Kingdom and the region, which can encourage significant investments in space industries, technologies and programs.

He also indicated that hosting the World Space Week event at the beginning of October confirms Bahrain’s desire to invest in the future of this vital sector and its opportunities.

Ali Al Hashimi, CEO of Al Yah Satellite Communications Company (Yahsat), said: "The UAE currently has more than 17 orbital satellites, with Ten other satellites under development, and it has more than 50 companies, institutions and space facilities operating within the country, from international to emerging companies. We hope that these numbers will multiply many times over the next few years, especially with the announcement of the UAE project to explore the planet Venus and the Asteroid Belt, which will carry out unprecedented scientific missions over a period of five years from 2028 to 2033."

He added: "There are promising opportunities for cooperation in the field of space technology and satellites among the Gulf Cooperation Council countries, in conjunction with the development projects and ambitious strategic visions that they are implementing, which are reflected positively on the investment landscape and the growth of partnerships with the private sector in new avenues, including the space and advanced technology sectors."

The session touched on the promising investment opportunities in the UAE space sector. The expenditures of UAE’s space sector is over AED22 billion and includes more than 20 local startup companies in the sector, with local and international companies now operating in the Emirates in specializations related to the space sector and its industries.

The virtual sessions organised by the UAE Government Media Office, with the participation of officials and experts from the region, come as part of efforts to highlight the most prominent new opportunities sparked by the "Projects of the 50", which constitutes a new cycle of strategic projects in the UAE for the next 50 years, and aims to establish a new phase of internal and external growth of the state in various economic sectors.