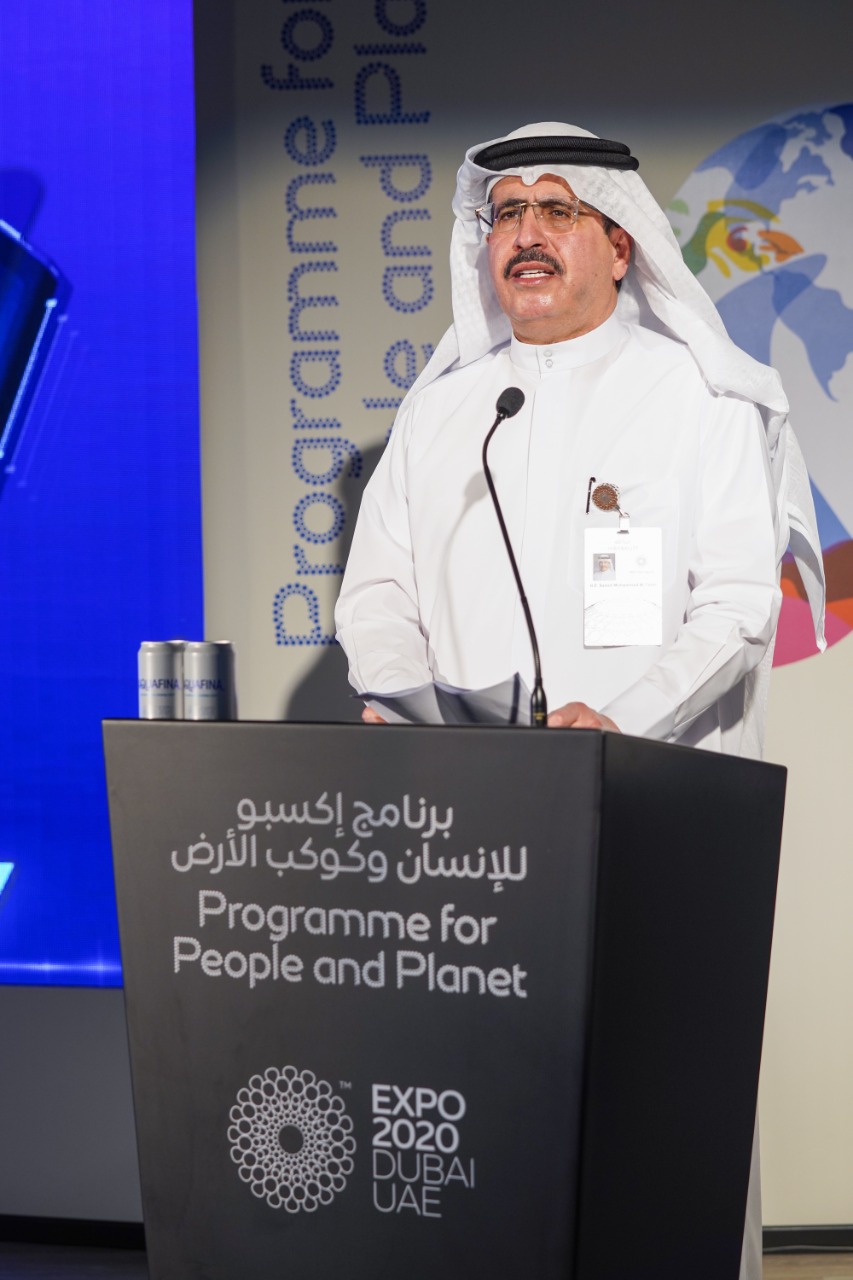 DUBAI, 31st October, 2021 (WAM) -- Saeed Mohammed Al Tayer, MD and CEO of Dubai Electricity and Water Authority (DEWA), emphasised that Dubai has an ambitious plan for the next 30 years to achieve zero carbon emissions and reach 100 percent of clean energy by 2050.

Al Tayer made these remarks in his keynote speech at the World Cities Day, which was organised by the UN Habitat, Dubai Executive Council, and The United Nations Office for Disaster Risk Reduction (UNDRR) with the theme ‘Better City, Better Life,’ at Expo 2020 Dubai. That was part of the Urban and Rural Development Week, which brings together leaders, experts and specialists to discuss the challenge the world’s existing cities and communities face and explores how to transform the way we move, build, consume and live in the habitats of the future. The World Cities Day addressed many topics including adapting to climate change and enhancing the resilience of cities, especially after recovering from COVID-19 crisis. A large number of local and international officials, CEOs, experts and scientists took part in the event.

"Under the wise leadership of President His Highness Sheikh Khalifa bin Zayed Al Nahyan; His Highness Sheikh Mohammed bin Rashid Al Maktoum, Vice President, Prime Minister and Ruler of Dubai; and His Highness Sheikh Mohamed bin Zayed Al Nahyan, Crown Prince of Abu Dhabi and Deputy Supreme Commander of the UAE Armed Forces, we are turning challenges into promising opportunities. During Expo 2020 Dubai, the UAE announced a strategic initiative to achieve climate neutrality by 2050, making the UAE the first country in the Middle East and North Africa to do so. We will do this by intensifying the nation’s efforts to achieve sustainable economic growth with a direct positive impact on the GDP. in line with the vision and directives of His Highness Sheikh Mohammed bin Rashid Al Maktoum, to promote the transformation of Dubai to a carbon-neutral economy by 2050, the Dubai Supreme Council of Energy, chaired by His Highness Sheikh Ahmed bin Saeed Al Maktoum, has approved an in-depth study on how the Emirate of Dubai can achieve carbon neutrality (Net Zero Emissions) by 2050 through a clear strategy and roadmap to transform Dubai into a centre of excellence in the essential new technologies to achieve zero carbon emissions and reach 100 percent of clean energy by 2050. Dubai has an ambitious plan for the next thirty years. Programs and mechanisms have been developed for the next period. It includes the energy and water sectors, transportation, industry, buildings, and waste. The plan also includes all the necessary enablers, regulations and R&D," Al Tayer said.

"The ‘Projects of the 50’ initiative launched by our wise leadership aims to diversify and strengthen the UAE’s economy. His Highness Sheikh Mohammed bin Rashid Al Maktoum has praised the public and private sectors for their robust response to the wide-ranging challenges presented by the COVID-19 pandemic. The UAE has presented a global role model in dealing with crises and overcoming challenges. It made significant achievements with its flexibility and efficiency; presenting best practices that will bring about fundamental positive changes to our planet. Despite the pandemic, we maintained our business continuity by implementing our sustainable projects and initiatives, as well as mitigating climate change by balancing economic development and preserving a clean, healthy, safe, and sustainable environment," Al Tayer added.

"Cities around the world are increasingly suffering from the effects of climate and other challenges; such as floods, droughts, sea level rise, heatwaves, landslides, and storms. In the UAE, we have a clear strategies and plans to deal with climate change and address its overall impact. Promoting a climate-resilient economy to face climate change is a prerequisite for the UAE and Dubai to make this transformation. Dubai Government works closely with organisations that are addressing climate change and its impact, and has also set mitigation and adaptation plans for the Emirate. One of these plans is the Dubai Climate Change Adaptation Strategy. Our plans are well aligned with this strategy based on our Climate Change Resilience Plan to assess and realistically forecast climate change. The plan identifies existing mitigation measures, preventative controls, and measures to ensure resilience in the future, as well as address the impact of various climate change drivers. The UAE has launched pioneering projects to diversify its clean energy mix. These include all available clean and renewable energy sources and technologies such as solar photovoltaic systems, Concentrated Solar Power (CSP), green hydrogen production using solar power, pumped-storage water technology, electricity generation from wind power, as well as peaceful nuclear power," he added.

Al Tayer said that in 2019, Dubai once again proved its commitment and efforts to ensuring city sustainability, through Dubai Electricity & Water Authority (DEWA), by achieving a platinum rating in the LEED (Leadership in Energy and Environmental Design) for Cities certification awarded by the US Green Building Council (USGBC). Dubai is the First City in the Arab world and the Middle East and North Africa to obtain this certification. Last September, Dubai was ranked first globally for its resilience and recognised as a role model for sustainability by the United Nations Office for Disaster Risk Reduction (UNDRR). The award is presented to the best global cities in the efficiency of measures that enhance resilience and reduce risks. Dubai joined the world’s C40 Cities Climate Leadership Group, becoming part of an elite group of the world's cities committed to fighting climate change. This is a recognition of the city’s advanced role in environmental protection. Dubai also achieved significant reductions in carbon emissions. Net CO2 emissions in Dubai decreased by 22 percent in 2019, two years ahead of the target of the Dubai Carbon Abatement Strategy 2021 to reduce carbon emissions by 16 percent in 2021. The Dubai Demand Side Management Strategy 2030, which has 11 programmes, achieved significant results between 2011 and 2020. In 2020, the annual per capita consumption of electricity decreased by 23 percent, and water consumption lowered by 21 percent compared to 2010. The total savings were 25 TWh of electricity and 40 billion imperial gallons of desalinated water, equivalent to a reduction of 11.5 million metric tonnes of carbon dioxide emissions for the same period.

Al Tayer said that Dubai continues to roll out the phases of the Mohammed bin Rashid Al Maktoum Solar Park, the largest single-site solar park in the world. It is based on the Independent Power Producer (IPP) model and has a planned capacity of 5,000 megawatts by 2030. We also commissioned the Green Hydrogen project at the Mohammed bin Rashid Al Maktoum Solar Park in Dubai. "We are also developing an ambitious strategy for green hydrogen production to increase its uses in all suitable applications in the short, medium and long term until 2050."

Dubai is taking a unique approach to its evolution into a smart city that always seeks to improve its inhabitants’ quality of life. We aim to build a city where advanced technology plays a major role in providing smart services that deliver a better quality of life for everyone. We are working to achieve the goals of the Dubai 2040 Urban Master Plan, launched by His Highness Sheikh Mohammed bin Rashid Al Maktoum in March 2021, which outlines an integrated roadmap for sustainable urban development to make Dubai the world's best place to live. This is why Dubai has been a pioneer in developing platforms for partnerships to present the best global experiences in green economy and technologies, and identify the best investment and trade opportunities. DEWA and the Green Economy Organisation organised the 7th World Green Economy Summit under the patronage of His Highness Sheikh Mohammed bin Rashid Al Maktoum with the theme ‘Galvanising Action for a Sustainable Recovery,’ in the first Week of Expo 2020 Dubai.

"I thank the UN Habitat, The Executive Council of Dubai, and The United Nations Office for Disaster Risk Reduction. I am sure this event will significantly showcase ambitious initiatives, diverse solutions, and best practices for a green and resilient urban recovery in the Middle East and Africa and around the world," concluded Al Tayer.