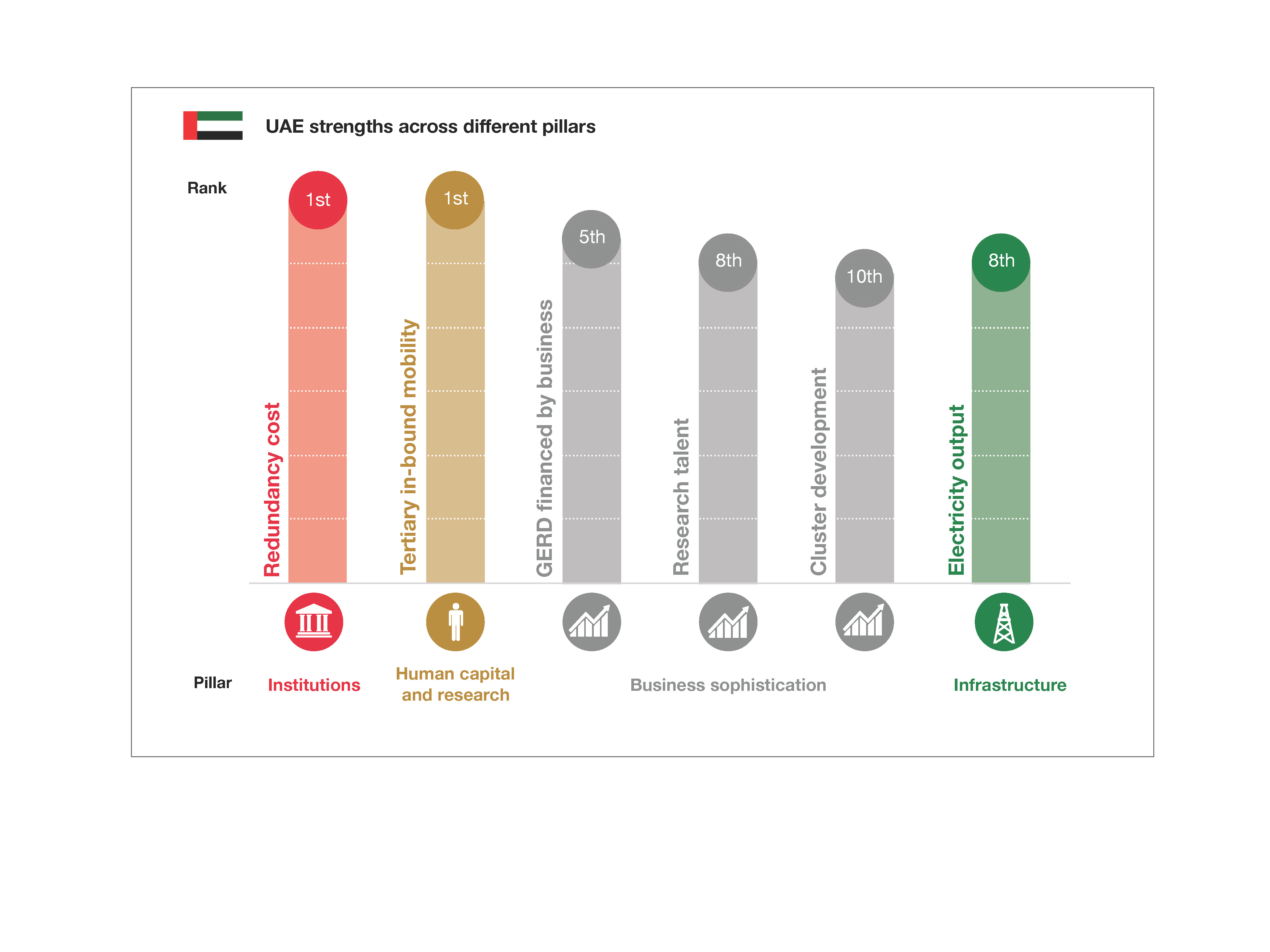 ABU DHABI, 24th July, 2019 (WAM) -- The UAE has maintained its good standing in this year’s edition of the Global Innovation Index, GII, ranking among the top 3 innovation economies in the Northern Africa and Western Asia region and jumping two spots to 36th globally.

The country ranked 24th and 58th on the innovation input and output sub-indices respectively. The results were officially presented in the Indian capital of New Delhi in front of high-level figures with the UAE being represented by Dr. Ahmed Al Banna, UAE Ambassador to India.

The positive positioning across these indices reflects the significant improvements and high performances in pillars such as human capital and research, infrastructure, creative outputs and institutions. For example, these pillars include increases in indicators such as global R&D companies’ expenditure, government online services and e-participation indices, creative goods exports and ease of starting a business.

More generally, the Global Innovation Index report annually ranks countries based on their capacity to innovate and, this year’s version of the report measured the performance of 129 countries and economies representing the vast proportion of the global Gross Domestic Product, GDP.

The index itself was calculated based on detailed measures of innovation inputs and outputs – including 80 indicators providing insights on the various areas of innovation, most notably institutions, human capital and research, infrastructure, market sophistication, business sophistication, knowledge and technology outputs, and creative outputs.

The GII is commonly used by corporate and government officials to compare countries by their level of innovation inputs and outputs and the UAE is further working on the development of metrics aimed at measuring innovation outcomes in order to fully capture the economic impact of innovation at both national and regional levels.

The country is now implementing a strategic roadmap that aims at improving its short-term results in the GII as part of the overall National Agenda while also enhancing long-term innovation results. The objective is to position the UAE as one of the most innovative countries in the world.

Commenting on the results, Sultan bin Saeed Al Mansouri, Minister of Economy, said that the UAE's positioning on the index can be attributed to the country’s consistently high performance over the past four years, moving 11 position up from 47th in 2015 to 36th in 2019.

He added, "The UAE’s improved performance in the 2019 version of the GII is a testament to the continuous efforts of the country to improve its innovation landscape. These efforts are driven by strong partnerships between innovation players from public, private and academic sectors."

"Our solid global innovation performance has given us the confidence to further embark on an ambitious innovation program with short-term initiatives to boost our global innovation ranking and longer-term transformational initiatives to become among the top global innovation leaders. With this in mind, newer initiatives will be rolled out with the chief goal of further expanding fundamental and applied research conducted in the country and linking it to robust financing mechanisms. In addition, the country is looking to enhance the knowledge economy by amplifying the number of Intellectual Property applications and registrations made inside the UAE through the attraction of foreign companies and the introduction of licenses for IP holding companies," the minister continued.

He went on to say, "Our efforts are aligned with other strategies that were launched by our government such as the National Strategy for Advanced Innovation and the UAE Strategy for the Fourth Industrial Revolution. We constantly aim at boosting the UAE’s innovation ecosystem in order to ensure that the country remains at the forefront of the latest technological advances."

On the education front, Hussain bin Ibrahim Al Hammadi, Minister of Education, said, "Innovation constitutes a fundamental pillar for the education sector, as it provides an input upon which quality outputs can be generated; thus contributing to the country's advancement and progress. The Ministry of Education is aligning its efforts with the future plans of the State in order to achieve the targets set for innovation indicators. This, in turn, will lead to enhanced competitiveness in an important and vital sector that is capable of both strengthening the UAE's prosperity and paving the way for its rapid transition towards a sustainable knowledge economy."

He added, "The Ministry's fundamental plans to develop the educational system are centred on the achievement of national education indicators, the enhancement of the scientific research scope and the devotion of talent to UAE schools and higher education institutions, thus ensuring that the UAE is positioned as an entrepreneurship and innovation hub. The strengthening of our partnerships with relevant state institutions is based on a collaborative and complementary approach essential for the implementation of National plans aimed at enhancing innovation across various institutions. The benefits of this approach are clearly reflected in the world-class levels of our students in the research and innovation field."

"The support received from our leadership, the detailed planning and the balanced governmental approach are behind these positive results and this remarkable development," Al Hammadi affirmed.

The labour component of innovation is of fundamental importance. To this extent, Nasser bin Thani Al Hamli, Minister of Human Resources and Emiratisation, stressed, "The Ministry is committed to actively contribute to the National efforts and we aim at achieving overall UAE competitiveness and Global Innovation Index targets by implementing and developing policies and programs that attract the world’s most qualified and experienced workers to the labour market. This should increase the proportion of knowledge workers, who are essential for the promotion of innovation."

He added that strengthening the capacity of the labour market is a priority that the Ministry of Human Resources and Emiratisation is seeking to achieve in cooperation with its partners, particularly by developing the skills of workers and empowering them, thus ensuring that we will be able to deal with the technological advances and the demands of future jobs.