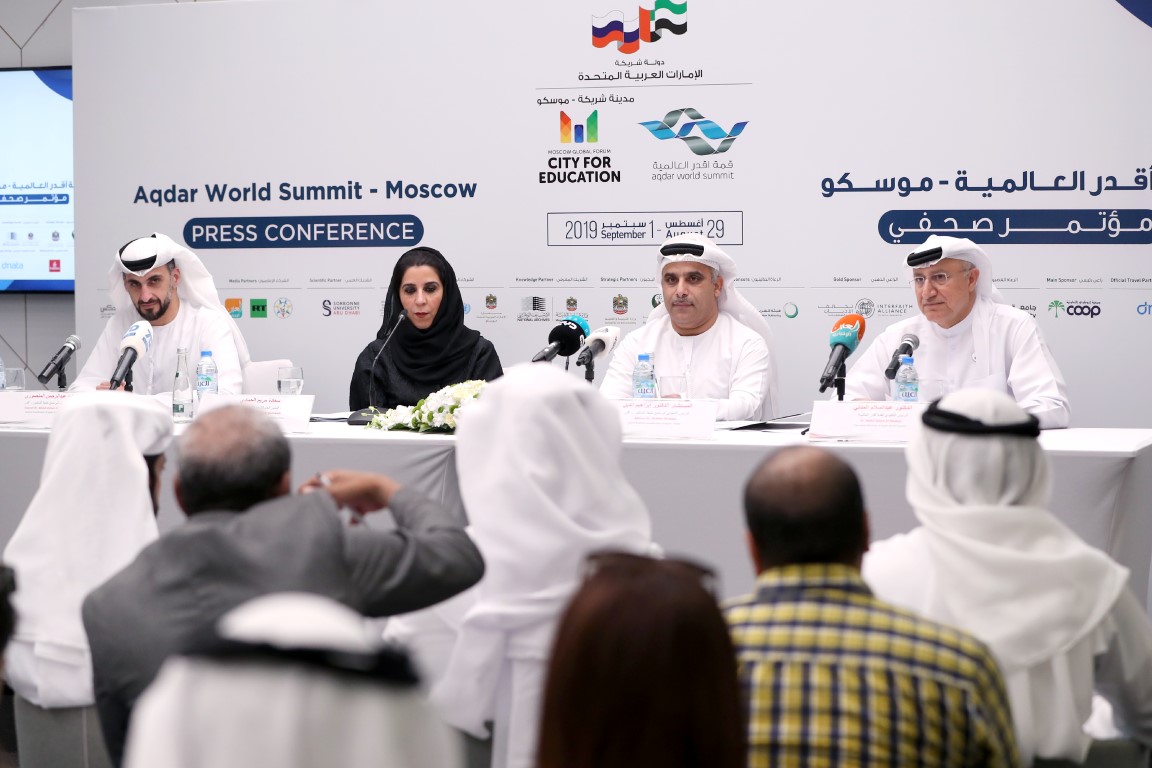 ABU DHABI, 6th August, 2019 (WAM) -- The Aqdar World Summit organising committee held a press conference in Abu Dhabi today, where it announced the conference agenda, workshops, and the activities to be held during the summit which will take place in Moscow.

The organising committee members also announced the names of the main speakers in this global event that highly emphasizes on empowering strong generations and provide them with knowledge and expertise to develop advanced communities.

The top-notch speakers will discuss various topics related to human empowerment in fields like, education, culture, technology, and others while focusing on three main topics - 'Education and National Service: The Fundamentals for Empowering UAE Youth', 'The Technical, Intellectual, and Food Security: The Strategic Pillars to Empower Communities and Youth – The UAE Model', and 'The Role of the Advanced Sciences and Future Projects in Empowering and Improving the Well-Being of Communities'.

Aqdar World Summit will be held for the first time in the Russian Capital, Moscow, from 29th August - 1st September 2019 under the theme, 'Global Empowerment of Communities: Experiences and Lessons Learned'. This year, the summit attracts leaders, dignitaries, leading experts, and speakers from around the world who will shed light on humanitarian issues and the development of sustainable individuals and societies. The summit will also discuss education and its role in developing countries as it is the driving force of development in any community.

The UAE's Minister of Education, Hussain bin Ibrahim Al Hammadi, is set to take part in the summit and talk about developing the UAE's education system. On a similar note, Major General Pilot Sheikh Ahmed bin Tahnoon Al Nahyan, Chairman of the National Service and Reserve Authority will discuss various matters in a session titled "Empowering the Emirati Children to achieve Global Citizenship", while Dr. Ahmad bin Abdullah Humaid Belhoul Al Falasi, Minister of State for Higher Education and Advanced Skills and Chairman of the UAE Space Agency, will offer his insights on space studies in higher education.

Mohamed Al Junaibi, Director of the Presidents Protocol Office at the Ministry of presidential Affairs, Chairman of the Higher Committee of Special Olympics World Games-Abu Dhabi 2019 will participate in a session highlighting the UAE's experience in empowering People of Determination.

The second day of the summit will feature the participation of Omar bin Sultan Al Olama, Minister of State for Artificial Intelligence, Mariam Hareb Almheiri, Minister of State for Food Security, and Dr. Ali Rashid Al Nuaimi, Chairman of Hedayah International Centre, Chairman of the World Council of Muslim Communities, who will speak about the UAE's strategy to counter intellectual extremism.

Brigadier Mohammed Hamid Dalmouj Al Dhaheri, Head of the Office of H.H. Deputy Prime Minister of Interior, said, "Aqdar World Summit is one of the unique global and humanitarian initiatives that support the vision of the UAE in spreading tolerance and building stronger communities intellectually, scientifically, and morally on the basis of peace, love and co-existence. These initiatives also emphasize on the global role of the UAE in the coordination and cooperation domain at international levels to achieve prosperity for individuals and societies."

He continued, "The UAE has set itself as a role model in empowerment and has always followed the steps of our wise leaders who work diligently to spread the noble values of the UAE in terms of tolerance and accepting the others."

Al Dhaheri went on to note that the Summit is an inspiring initiative for the whole world due to its meanings, goals, and the message it holds that aims to spread happiness, hope and raise the patriotism among the aspiring generations. "We truly believe that holding the summit in Moscow will highlight the role of the UAE as a leading model in constructive dialogue and openness of humanity and building bridges of communication and convergence among the people all over the world. It is also a translation for the message of sustainable development which was written by the founder the late Sheikh Zayed bin Sultan Al Nahyan in the spirit of tolerance and peace."