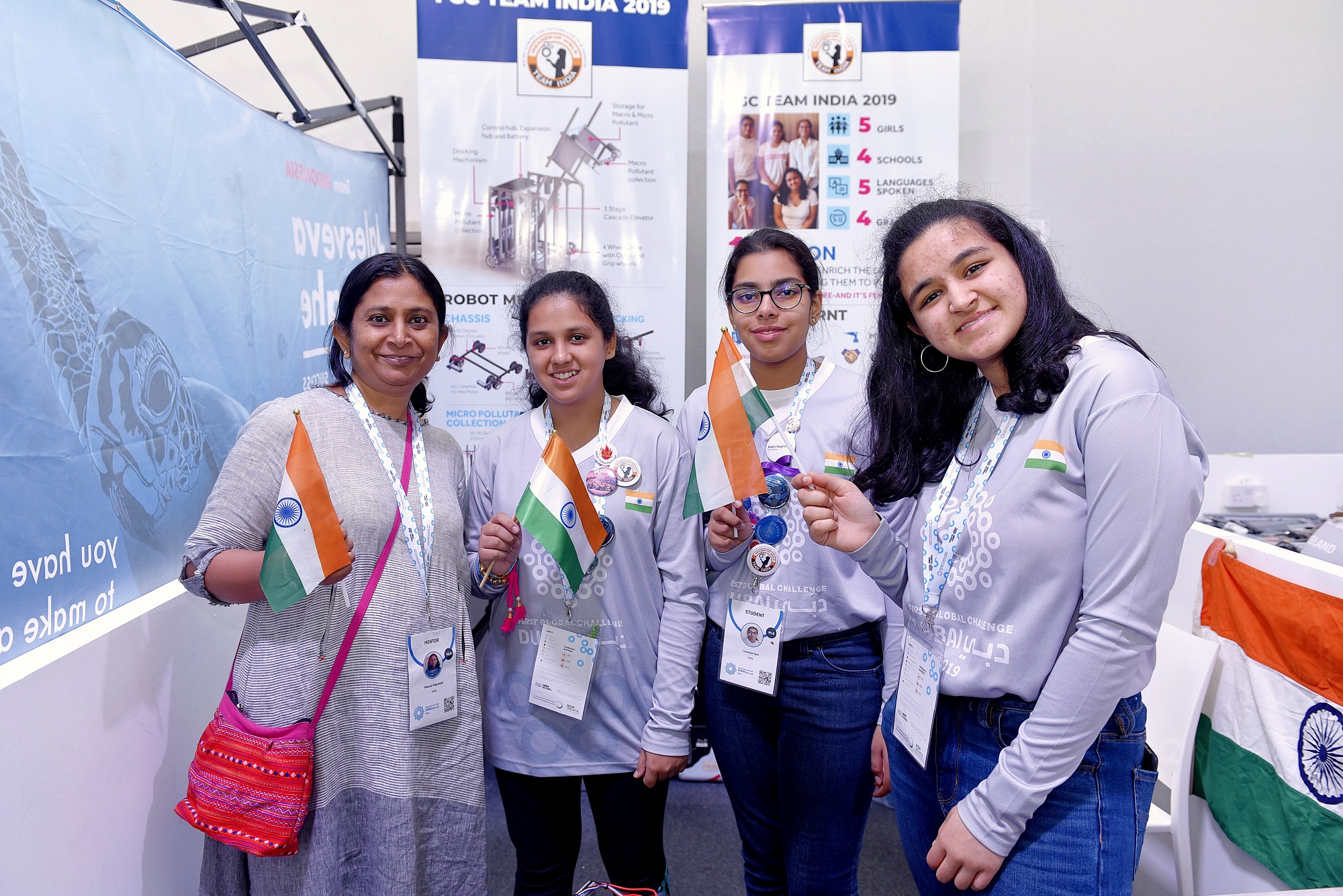 DUBAI, 26th October, 2019 (WAM) -- Members of Geared-Up Girls have been lugging their robot, Shakti (the Sanskrit word for power), around in a suitcase all morning for practice at Festival Arena, frantically adding tweaks to improve the consistency and reliability of the prototype.

The all-girl team representing India at the FIRST Global Challenge 2019 in Dubai comprises teenagers between the ages of 15 and 17, and this is their first-ever overseas competition. Driven by their motto, ‘We are coding the future, and it’s female’, Geared-Up Girls have not just been developing their robotics capabilities to make a difference, but also conducting multiple outreach programs in India.

They started a FIRST LEGO League, FLL, team, working with underprivileged girls in the interior of Central India, and have raised funds to donate an FLL kit to these girls. FLL is an initiative by not-for-profit organisation FIRST Global that engages younger students in real-world engineering through challenging them to build LEGO-based robots to complete tasks.

They have also conducted STEM workshops for children in Dharavi, Asia’s largest slum in Mumbai, and uploaded various tutorials on Playfield construction and Engineering Notebook documentation and strategy with the wider FIRST Global Challenge community through social media.

"This is the only team that has no formal robotics background, but they managed to convince local judges back home that they could build and develop a robot capable of bringing home a trophy for India," says Meenal Majumder, Mentor of Geared-Up Girls and a banker by profession.

"The girls were actually part of a larger mixed-gender robotics team earlier but were never given the chance to take on any of the technical roles. They were made to believe that they should only handle the journaling, fundraising or presentation-related tasks, and not do any of the actual robot construction or programming," adds Majumder.

The FIRST Global Challenge 2019 in Dubai has invited the participants to design, construct and program a robot to collect macro- and micro-pollutants in the ocean. The robot must be able to deposit the collected pollutants to any of the three levels of the processing barge or into the reduction processing hub located on the sidelines of the competition area to gain points.

Geared-Up Girls’ Radhika Sekhsaria, aged 16, explains that Shakti is different from the other teams’ robots because it has a universal collection and delivery mechanism that can simultaneously pick up macro- and micro-pollutants, thus saving time.

"Shakti is more reliable, consistent and versatile than the robots that we’ve practiced against, so I believe we stand a very good chance of winning," adds her 15-year-old teammate Lavanya Iyer.