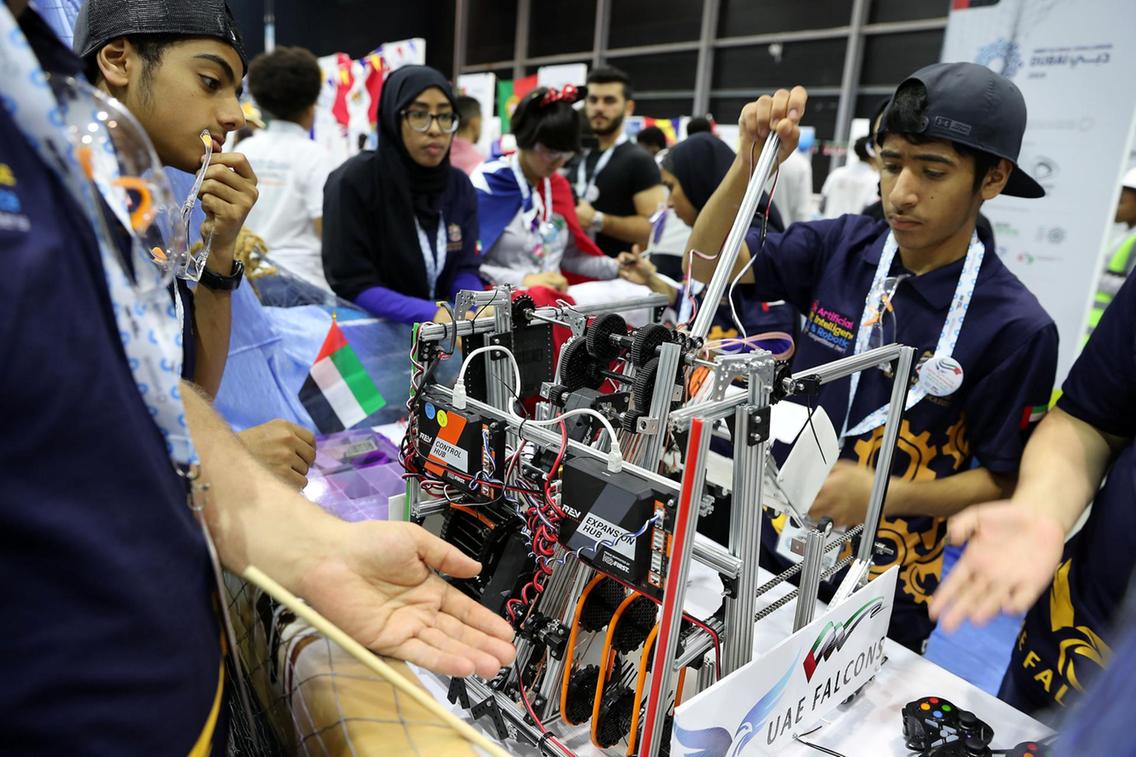 DUBAI, 26th October, 2019 (WAM) -- Masterminded by Dean Kamen, the third FIRST Global Challenge being hosted in Dubai has brought more than 1,500 students from 191 countries together to invent robotics that can tackle marine and ocean-life problems At one time, technologies invented by Dean Kamen was responsible for all of the world’s dialysis machines and 80 percent of the world’s insulin pumps. The 68-year-old inventor, technologist and serial entrepreneur from New York is not afraid of taking on humanity’s big challenges. And his appetite for changing the world is not abating, as he brings his brainchild, FIRST Global Challenge, to Dubai this week.

The FIRST Global Challenge is the annual Olympics-style competition that invites students aged 14-18 from across the globe to invent and master robots that will compete in a series of trials and events that can address, and potentially offer answers to the biggest challenges facing the planet today. This year’s event seeks to address the theme of "Ocean Opportunities". A series of heads-to-head events have been created to replicate how technologies would be used to clean up the oceans using the tech developed by the students’ inventions.

Being hosted at Festival Centre, Dubai Festival City, under the organization of Dubai Future Foundation,DFF, the event has witnessed a notable 15 percent increase in entrants from the first iteration hosted in Mexico City’s Olympic Stadium last year, which drew the participation of 165 countries. This year, 192 countries have sent teams of five students, meaning that 1,500 students from around the world have descended on Dubai to be part of a global conversation about youth development, technological development and environmental sustainability. It’s no small feat.

"This is only the second time there’s been a FIRST event anywhere outside the United States. I was skeptical that we could improve on the attendance of our first event, but Dubai promised that would host the world, and wow, have they delivered on that promise!" Kamen beams.

"And it’s not hard to see why Dubai has made this event such a spectacular success. I like to think of Dubai as the posterchild for the hosting of high-tech events and the development of emerging technologies. You know, you’re at the centre of the world here, and there’s a real drive and ambition to turn this place into a global hub for innovation lead by the youth."

For Kamen, the inception of FIRST, an acronym of "For Inspiration and Recognition of Sciences and Technology" in 1989 sprung from a desire to give American youth the tools and motivation to shape the destiny of the inevitably artificial intelligence-powered future jobs market. And the motivating factor behind it all was what he identified as a "cultural crisis".

"Inventors look at the same problems everybody else looks at, but just looks at them a little differently," he explains. "Big inventions don’t come from completely new tech, they stem from redefining the problem.

"Suddenly, media fixated on sports. A new form of entertainment was available – with big pictures, sounds and viewing experiences, and sports professionals became global superstars. Baseball was no longer a national pastime, it was a national obsession. The Superbowl was bringing the country to its knees. Congress stops holding sessions during the final four of the NBA.

"Can you imagine that happening for a technologist? An inventor? A scientist? Of course not."

The impetus and success that FIRST garnered in its first 28-years of operation soon brought attention to the global stage. And Kamen branched the work of the company out onto a global scale, forming the FIRST Global Challenge which began its work in earnest in 2018. Backed by a global board of c-suite executives from Canada, Mexico and the Middle East, who Kamen says all "share the same fundamental passion as me for developing the youth", FIRST Global has already become a major force.

Central to everything Kamen has done has been the problem of role models and a credible platform for the crucial science, technology, engineering and mathematics,STEM, sectors that will drive future employment and economic growth. With every child’s role model stemming from professional sports, technologists and inventors weren’t being given the platform to reach a global audience in the way that Aaron Rodgers, Tom Brady and LeBron James were.

"And that’s what we’ve set-out to tackle here: we’re competing with the Superbowl, here. We want to give these kids a platform where they have a chance at a long-term career. You know, this is often fundamentally misunderstood: Kids aspire to play in the National Football League,NFL, in the National Basketball Association,NBA, or perform on a big sports or music arena in front of thousands. But the chances of making this happen are so slim. Why don’t we have this same enthusiasm for the sciences, technology and invention? Kamen continues, gesticulating wildly and animatedly with his hands, his passion and enthusiasm in his rhetoric powered by a deep-rooted belief in the youth and their ability to shape the world: "We’ve lived through a time where a culture around STEM field has been created that turns girls away because of a perception of it not being glamorous. "This has to change. And this isn’t down to an education crisis – we need to put these kids on a stage where they feel like they get the attention and positive press that sports stars get.

"If we give kids this platform, they’re not just going to stand on the shoulders of the technologists that went before them, but they will improve the existing tech and create new ways of seeing and living in the world in the future."

It’s not hard to see where Kamen’s drive comes from. His 94-year-old mother still teaches, he adds with a wry laugh. "She never misses an opportunity to tell me that she still works with kids, and she does it because giving them the tools – emotional, technical and intellectual – to succeed is the only legacy we can leave on this planet that is worthwhile."