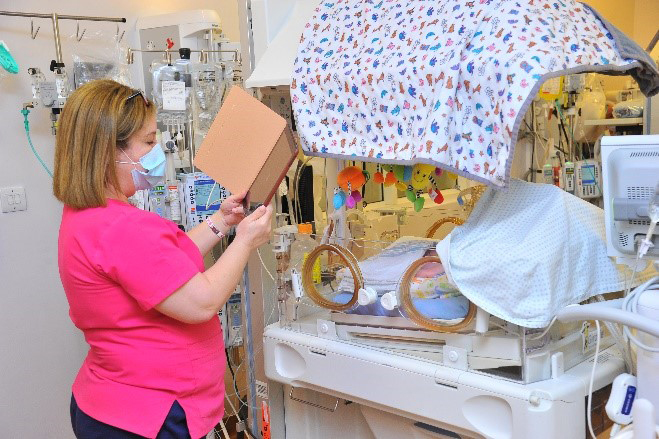 ABU DHABI, 29th July 2020 (WAM) - Zeina, an infant admitted to the Neonatal Intensive Care Unit (NICU) at Corniche Hospital, will be celebrating her first birthday soon. Her family hopes they will be able to celebrate with her back home in Kuwait.

She is the one of twin babies born to a Kuwaiti family who decided to come to the UAE to access the advanced medical care offered by the Corniche Hospital’s Fetal Medicine Unit during their pregnancy.

Zeina was born at Corniche Hospital prematurely at 24 weeks on August 8, 2019. She was admitted to the Neonatal Intensive Care Unit (NICU) where she received advanced and specialized medical care.

Zeina’s parents had to fly back home to attend to the rest of their children. Since February 8, 2020, Zeina has been under the full and sole responsibility of the Corniche NICU staff, who have been providing her with the most advanced and dedicated care, including daily pediatric physiotherapy sessions.

The passionate NICU staff have developed a special bond with Zeina as they saw her blossom and grow from the 600gram pre-term newborn to the 8-kilogram healthy baby she is now; they witnessed her first smile, heard her first giggle and were inspired by her strength.

Throughout this period, Zeina’s parents have remained closely in touch with her through the virtual NICU visits that the Corniche Hospital has introduced. The virtual visit technology allows parents who cannot visit their children due to movement restrictions or medical conditions to bond with their newborn, and communicate with the medical team that cares for their baby.

With the support of the NICU team, Lina, the mother, has been following Zeina’s development on a daily basis and has tuned in to her daily physiotherapy sessions.

"Our 64-cot Level III Neonatal Intensive Care Unit (NICU) is the largest and most advanced in the country. We care for newborns with critical illnesses at all gestational ages beyond 22 weeks of pregnancy and offer a full range of support services. We pride ourselves on our family centered care, and although, we follow strict precautionary measures that exceed international standards and assure the health and wellbeing of newborns, we also recognize the role of parental bonding in a baby’s healthy development." said Linda Clark, CEO at Corniche Hospital.

The Kuwaiti family had chosen UAE’s Corniche Hospital during pregnancy due to the in utero complications associated with twin pregnancies, and were seeking the advanced medical care that the hospital is well-known for. The condition was treated by a team of fetal medicine consultants where they performed fetoscopic laser on the twins inside the mother’s womb - a highly specialized procedure that is needed to treat severe twin-to-twin transfusion syndrome in some monochorionic pregnancies.

"The Fetal Medicine Unit is the only center in the UAE and one of the few in Gulf region that offers this procedure. We have completed the 100th fetoscopic laser procedure during this week, a milestone that marks our legacy of expertise in the fetal therapy. Mothers and fetuses are our patients." said Dr Leanne Bricker, Consultant in Fetal Medicine and Chair of Fetal Medicine and Medical Imaging at Corniche Hospital.

"I express my utmost gratitude to the Corniche Hospital in Abu Dhabi for their efforts in taking such great care of my daughter Zeina despite the conditions, and I also express my heartfelt thanks to the country of tolerance and humanity, the UAE, and to the Mother of the Nation, Sheikha Fatima, and to His Highness Sheikh Mohammed Bin Zayed Al Nahyan, may God prolong his life." said Zeina’s mother in response to Corniche Hospital’s efforts.