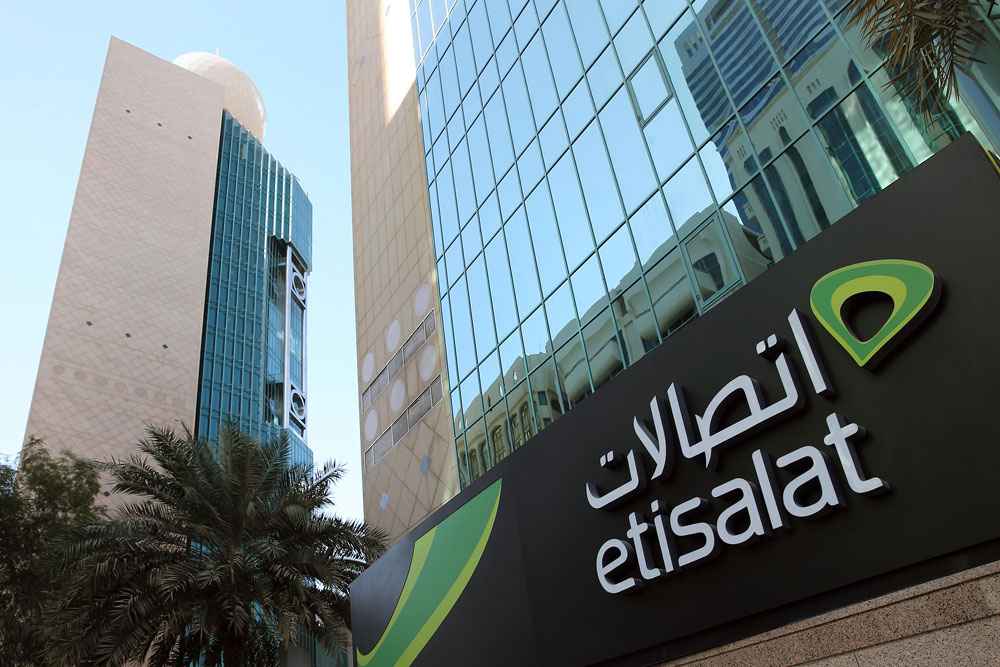 "We will our experiences with peers and technology leaders as well as exchange experiences in innovation that is set to transform every industry that uses mobile technologies from transport, retail, healthcare, education to fashion, automotive, utilities and entertainment. Etisalat has become a key regional and international player in 5G especially with one of the biggest world expo powered by 5G to be held next year."

Speaking with the media ahead of the 40th GITEX Technology Week, starting tomorrow, Dowidar said UAE today has the fastest network in the world.

On how Etisalat has contributed to this global achievement, Etisalat on its part has continuously focused on innovation as part of its strategy ‘Drive the digital future to empower societies’ embedded within its DNA manifested across the business.

"Today Etisalat’s mobile network is recognised by Ookla as the fastest in the world showcasing high speeds all throughout this year. UAE network ranked with the fastest mobile download speed worldwide in January, March and July 2020. Etisalat is also the winner of Ookla’s Speedtest Awards for fastest fixed broadband network in Q3-Q4 2019 and was recognised in the same year as the leading operator for fastest mobile and broadband network. With a download speed of 115.89 mbps and an overall ranking in the ‘Speed Score’ at 98.78, Etisalat is the only operator globally to rank higher than 90 as per Ookla Speedtest data. The achievement is significant in current times when the pandemic caused global crisis highlighting the importance of a robust and up-to-date network."

He added, "Etisalat was always the first in the region to take a lead and launch previous generations of the network mainly 3G, 4G and 5G. The network coverage today reaches across the country with 4G LTE network coverage touching 99.70 percent and 3G covering 99.82 percent. FTTH has reached 95.7 percent of homes across the UAE, maintaining the UAE’s position as a global leader in FTTH for the third consecutive year. Network deployments in 5G reached over 35 percent covering the main cities in UAE."

On the special initiatives Etisalat adopted and implemented to help organisations navigate during today’s times, he said: "Special initiatives were introduced to support the entire community during the peak of the pandemic and to continue serving in the ‘New Normal’ making it easier to study, work, entertain and remain connected with family and friends from the comfort of their homes. More than 10 million Etisalat mobile subscribers enjoyed free browsing to over 800 websites related to education, health and safety in addition to free mobile data being made available to over 12,000 students whose families do not have Internet at home to support and enable distance learning.

"We have always catered to people with determination by offering specific services, during this period parents and teachers of these students were exempted from Internet Calling Plan fees. Etisalat also provided access to 9 apps and platforms for distance learning, allowing visual and audio communications: Google Hangouts, Microsoft Teams, Blackboard, Zoom, Skype for Business, Cisco Webex, Avaya Spaces, BlueJeans and Slack on its fixed and mobile network in collaboration with the TRA.

"Our initiative ‘We Pay the Difference’ for consumers on elife plans gave an option to upgrade speeds at no extra charge more than enough to work from home and stream their favorite content accompanied with multiple options for entertainment. From doubling up of allowances to supporting subscribers both business and consumers by waiving or refunding some charges, Etisalat made sure that all support was provided in the current situation.

"For companies, there were specific relief plans for small business owners, new businesses and large enterprises specifically the most impacted during the pandemic mainly the hospitality and airlines industry. With video communication becoming key for virtual meetings and facilitating work from home for government departments and businesses, Etisalat offered this service free during the peak of the pandemic.

"With employees coming back to work, it was important for all businesses to keep their establishments safe, Etisalat had specific solutions to help them manage these challenging times. Transforming business was also key for surviving and managing business efficiently, Etisalat’s web solutions helped new and existing businesses to engage across digital platforms and also supporting them to build an online interface.

"During the peak of the pandemic there was an overall growth in video conferencing and VoIP on both fixed and mobile network of more than 250 percent. The traffic increase in streaming services and video by more than 50 percent while in social media and gaming it grew more than 80 and 200 percent respectively."

On what Etisalat is doing to accelerate digital transformation and innovation reducing the digital divide gap and increasing digital readiness, Dowidar said, "At Etisalat we are already actively working with industry players for example the financial sector who stand to benefit the most from the technology. Our partnership for ‘UAE Trade Connect’ has eight UAE banks on the blockchain platform helping them to focus on addressing risks of double financing and invoice fraud before turning to other areas of trade finance.

"‘Shahada’ is another revolutionary effort on blockchain for the education sector that will securely issue credentials, avoiding forgery of paper-based certificates and creating an education passport.

Etisalat is also extending its efforts on blockchain in its loyalty programmes enhancing the experience for consumers to convert their loyalty or reward currencies. This technology is also coming in play to customise communication and messaging for subscribers centralising customer information and verifying it as well.

"For enterprises, cloud computing services are the foundation for customer’s digital transformation enabling services that will bring flexibility and availability for business critical applications. Etisalat today has evolved to a Cloud Managed Services Provider, sustained by state of the art platforms and infrastructure, partnerships with global leaders, hyper-scale cloud service providers and with a strong multi-cloud consulting and operations. The collaboration with Amazon Web Services and Microsoft Azure to offer Etisalat’s Cloud Express, a secured private connectivity between the customer’s corporate network and their public clouds was a major step in this direction. Oracle announced recently the launch of its Generation 2 Cloud deployment in Dubai, following the Gen 1 setup they had in Abu Dhabi, and once again, Etisalat is the proud infrastructure partner.

"The expansion of our datacenter (DC) capacity with two new larger energy efficient facilities in Dubai and Al Ain has led to capture more than 50 percent of the local market DC capacity bringing the total to ten certified facilities. Cloud is also the backbone of Etisalat’s new ‘Business Edge’, a new business platform offering a wide range of cutting-edge services from the cloud and targeting the SMB segment remaining an important engine of growth in the UAE.

"The application of cutting-edge robotics, AI and biometric technologies also played a key role in improving business operations. There was an emphasis on transforming the brick and mortar experience to digital retail providing a digital experience to the customer. Digitisation in retail and self-service touchpoints expanded the rollout of ‘Smart Stores’ by upgrading the current stores. There was an increased focus on driving the subscriber online with a revamp of our portal and application. Transactions today are also seamless with virtual technologies being implemented for consumer transactions. Etisalat’s first new digital store is an illustration of our efforts.

"The main pillars of innovation here focused on providing customers a complete digital journey with full mobility, self-service with digital interfaces giving customers the flexibility to purchase packages and products including dispensing of SIM cards.

"5G is expected to enable new experiences and use cases, how do you see 5G and emerging technologies making an impact on businesses and the societies at large? "The availability and access to the super-fast speeds on 5G fixed networks from homes is a huge achievement and a result of the deliberate steps taken to innovate and execute during these challenging times. This achievement came after the global breakthrough in the 5G journey of 3.1Gbps download throughput over the 5G network and the first end-to-end 5G standalone call in the country and the first in the world.

"From making the first live 5G video call from the world’s tallest and iconic tower ‘Burj Khalifa’ to becoming the first operator to enable an international airport and a metro station, transform a smart district to empowering an international racing track with 5G connectivity, every milestone was a result of the long term planning and investment in one of the most advanced networks in the region.

"Etisalat continued to grow its roaming partners’ network with the successful launch of the 5G roaming service with 30 networks in 18 countries, while growing its 4G roaming reach to more than 520 networks in 178 countries, hence, giving Etisalat customers the world’s largest roaming footprint. As an ICT and data hub, a new tier 3 data center was added to the existing SmartHub facility in Fujairah facilitating customers from financial services, gaming, video streaming and cloud providers."

Commenting on Etisalat efforts in supporting innovation and entrepreneurship, he said, "There is a serious effort internally in building an AI capability, there is a team currently consists of 20 young Emiratis working on internal use cases focused on increasing operational efficiencies, building the capabilities of the next generation of Emirati youth and AI use cases for internal use. The team would continue to explore external use cases as well and from the second year would aim to build external use cases based on market requirement. The future plan is to expand the team from 20 to 50 to focus on AI use cases that includes the entire development journey from ideation to market release."

"Etisalat Digital", he added, continued to "foster open innovation with ‘Future Now’ an innovation programme that will accelerate the adoption of the latest technologies by collaborating with start-ups, IoT developers, government entities, enterprises and end-users to drive digital transformation."