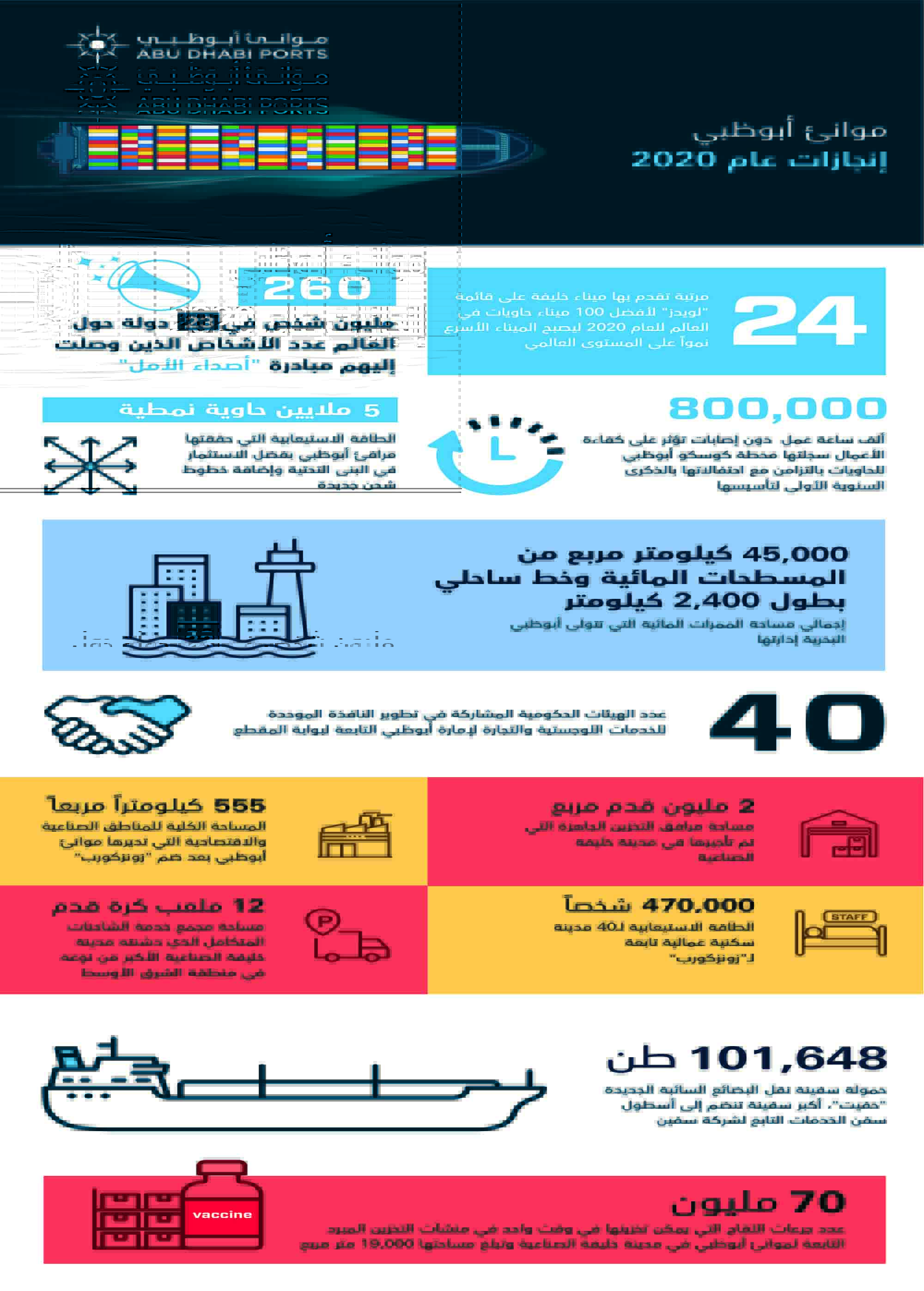 ABU DHABI, 31st December, 2020 (WAM) -- In facing the extraordinary challenge of a once in a generation pandemic, Abu Dhabi Ports has weathered 2020 particularly well, continuing to grow and expand its overall capacity and capabilities and emerge stronger than ever before.

With the advent of COVID-19, the company successfully raised its profile worldwide as a responsible player in the trade and logistics sector with the Horns of Hope campaign.

This innovative initiative reached more than 260 million people in over 23 countries and involved leading global and regional organisations, such as the International Maritime Organisation and the Arab Sea Ports Federation.

In tandem, Abu Dhabi Ports’ comprehensive business continuity strategy was implemented ensuring the smooth flow of goods and medical provisions supplied into Abu Dhabi continued as normal for the duration of the crisis.

By the close of the year, as the COVID-19 vaccine became available, Abu Dhabi Ports joined the Hope Consortium, the Abu Dhabi government-led effort to realise full global vaccine distribution. Abu Dhabi Ports is committed to utilising storage and distribution resources at its logistics facilities at the Khalifa Industrial Zone Abu Dhabi (KIZAD) toward the immunisation efforts of billions of people in the region and beyond.

Falah Mohammad Al Ahbabi, Chairman, Abu Dhabi Ports, said: "Abu Dhabi Ports contribution to addressing humanity’s greatest challenge in a generation is testament to the high esteem our organisation and assets are held both within Abu Dhabi and the UAE and around the world.

"In less than 12 months, Abu Dhabi Ports’ pandemic response and overall contribution to trade and logistics is accelerating its transformational journey from a domestic champion to a globally recognised player.

"Thanks to our wise leadership’s continuing commitment to develop all aspects of our maritime, trade, and logistics sectors, the UAE is ideally positioned to overcome all obstacles in line with the government’s long-term goals and objectives."

Captain Mohamed Juma Al Shamisi, Group CEO of Abu Dhabi Ports, said: "We are proud of Abu Dhabi Port’s wonderful achievements over the course of 2020. Despite the most difficult business environment, our broad portfolio has remained resilient and has continued to grow, keeping trade moving, building new facilities and infrastructure, and launching new services.

"By taking bold strategic steps and performing exceptionally, Abu Dhabi Ports is transforming its operations to deliver a truly outstanding maritime trade and logistics experience for all those who trade with our emirate, and, in turn, boosting Abu Dhabi’s international trade contribution."

Despite the unprecedented challenges that arose over the course of 2020, Khalifa Port, Abu Dhabi Ports’ flagship deep-water facility which today serves more than 25 shipping lines and offers links to over 70 international destinations, has managed to surpass expectations by achieving a series of magnificent milestones, such as progressing the ongoing South Quay and Khalifa Port Logistics (KPL) developments ahead of schedule.

One big player to invest in Khalifa Port’s ecosystem is Saudi-based Arabian Chemical Terminals (ACT), who signed a 50-year lease earlier this year. They will take advantage of a plot next to the 16-metre-deep quayside at KPL for a commercial bulk liquid and gas storage tank farm.

As part of its efforts to serve and facilitate the growing global trade demands within the Gulf region, and to support mainliner shipping clients, Abu Dhabi Ports also announced the establishment of a new feeder services company called "SAFEEN Feeders".

Expansion of services was also a key focus area for Khalifa Port’s terminals this year. CSP Abu Dhabi Terminal, the first overseas greenfield project of COSCO SHIPPING Ports announced the start of a direct, weekly service to several ports across Europe and the Indian Subcontinent.

Similarly, Abu Dhabi Terminals welcomed another mainline service to its growing network, providing additional direct coverage and fast transit times from the Mediterranean and the Red Sea into Abu Dhabi, and from Abu Dhabi into Southeast Asia and North Asia.

Closing the year on a high, the unveiling of the 2020 edition of Lloyd’s List Top 100 Container Ports revealed that Khalifa Port had advanced a total of 24 spots on the annual ranking. Moving from 95 to its new position of 71, the port was noted for achieving the largest percentage jump in container throughput than any other entrant and was crowned the fastest growing port in the world.

Other ports saw similar development over the past 12 months. In Abu Dhabi’s historical port area, the inauguration of "Marsa Mina", the city’s new waterfront lifestyle destination at Zayed Port, went ahead. The ribbon-cutting heralded the area’s transformation into an entertainment destination for international visitors and the local community.

At the start of December, we announced the completion of the second phase of development at Delma Port. Extending the port’s capacity to serve the region and the local community’s recreational, fishing, and commercial needs, including the creation of a 315-metre quay wall.

Despite the season’s later suspension, construction began on an impressive cruise jetty at Sir Bani Yas Cruise Beach – the signature tourist destination located off Abu Dhabi’s coast. The expansion will allow two vessels to dock at any given time and provide up to 5,000 passengers with direct access to embark and disembark at an accelerated rate on the southeast beach of Sir Bani Yas Island.

The formation of Abu Dhabi Maritime in July as the primary custodian of all waterways and marine ecosystems in Abu Dhabi, is expected to bring growth to the sector within the emirate and enable the UAE to complete its objective to become a globally recognised world-leading centre for maritime activities.

In September, in another step in its drive to enhance the emirate’s rank as an international hub for trade and logistics, Abu Dhabi Ports announced the acquisition of MICCO Logistics.

Innovating Trade Over the course of the year, one significant event stood out in Abu Dhabi Ports’ development of innovation.

Developed and operated by Abu Dhabi Ports’ Maqta Gateway under the supervision of the Abu Dhabi Department of Economic Development, the Advanced Trade and Logistics Platform (ATLP) aims to facilitate trade through sea, land, air, industrial and free zones, in addition to enhancing customer and stakeholder experience within the trade and logistics sectors.

Sheikh Khalid’s visit to the region’s largest industrial zone also included a detailed briefing on the ongoing projects in various phases of development at KIZAD and inspection of Abu Dhabi Ports Logistics’ Cold Storage Warehouse, one of the largest facilities of its type constructed in Abu Dhabi.

Developing Industrial and Economic Zones One of the biggest developments within our Industrial Zones and Free Zone portfolio this year was the integration of ZonesCorp under Abu Dhabi Ports. This milestone came in the wake of another significant development in the journey of Abu Dhabi Ports, its joining the portfolio of ADQ, one of the region’s largest holding companies with a broad portfolio of major enterprises spanning key sectors of Abu Dhabi’s diversified economy.

ZonesCorp brought over 900 manufacturing and commercial facilities, many of which are already utilised by some of the world’s leading industrial players.

Since the start of the year, ZonesCorp has attracted investments covering over 869,608 sqm of leased land. The company has also continued to expand the Workers’ Residential Cities (WRC) capacity with the addition of two new developments that have brought the total number of WRCs to 40. This in turn has increased capacity to house residents up to roughly 470,000.

With respect to KIZAD, the industrial zone began 2020 with an agreement with Shrinath Flexipack Pvt Ltd, India’s leading manufacturer of plastic packaging materials, to build its first factory in the Middle East within its Polymers Park.

Over the course of the year, KIZAD broke ground on several new developments including the Middle East region’s largest truck plaza, which is roughly equal in size to 12 soccer fields. Covering an area of more than 87,000 sqm, the facility will cater to the needs of workers and visitors to the zone and will include a dedicated ADNOC Distribution service station, as well as a community centre, retail outlets, a car care service, and a mosque.

In June, KIZAD announced the start of developing new warehouse products to meet the rising demand for pre-built facilities. A range of small-to-medium light-industrial warehousing units comprising the fourth, fifth, sixth, and seventh phases of the KIZAD Logistics Park were introduced throughout 2020.

In recognition of its efforts to support the continued development of Abu Dhabi’s industrial and manufacturing prowess, KIZAD was awarded three of fDi Magazine’s Middle East’s fDi Global Free Zones of the Year 2020 awards including the coveted Middle East – Large Tenants category.

The tour de force for Abu Dhabi Ports’ Industrial Cities and Free Zone portfolio for 2020 came in the form of an agreement between Abu Dhabi Ports and the Manufacturers Association of Israel (MAI) to enhance trade, investment, and technology cooperation between the two Middle East countries.

Opening a dialogue between Abu Dhabi Ports’ subsidiaries KIZAD and ZonesCorp with MAI, the agreement will see increased collaboration in areas of research and development, industrial cooperation, and transfer of knowledge.

In April, it announced the successful acquisition of "HAFEET", a Post Panamax bulk carrier, making it the largest vessel ever to join its inventory after it first completes an extensive conversion, prior to commencing operations.

SAFEEN also joined forces with Robert Allan Ltd. to develop the world’s first fully unmanned, autonomous commercial marine tugs. Though they are still in development, SAFEEN’s collaboration with the global commercial vessel designer is widely seen as a boost for the organisation’s increasingly advanced fleet, one driven by innovation and the need to satisfy the complex demands of an international clientele.