We will commemorate fifty years of Union by celebrating arrival to Mars: Mohammed bin Rashid 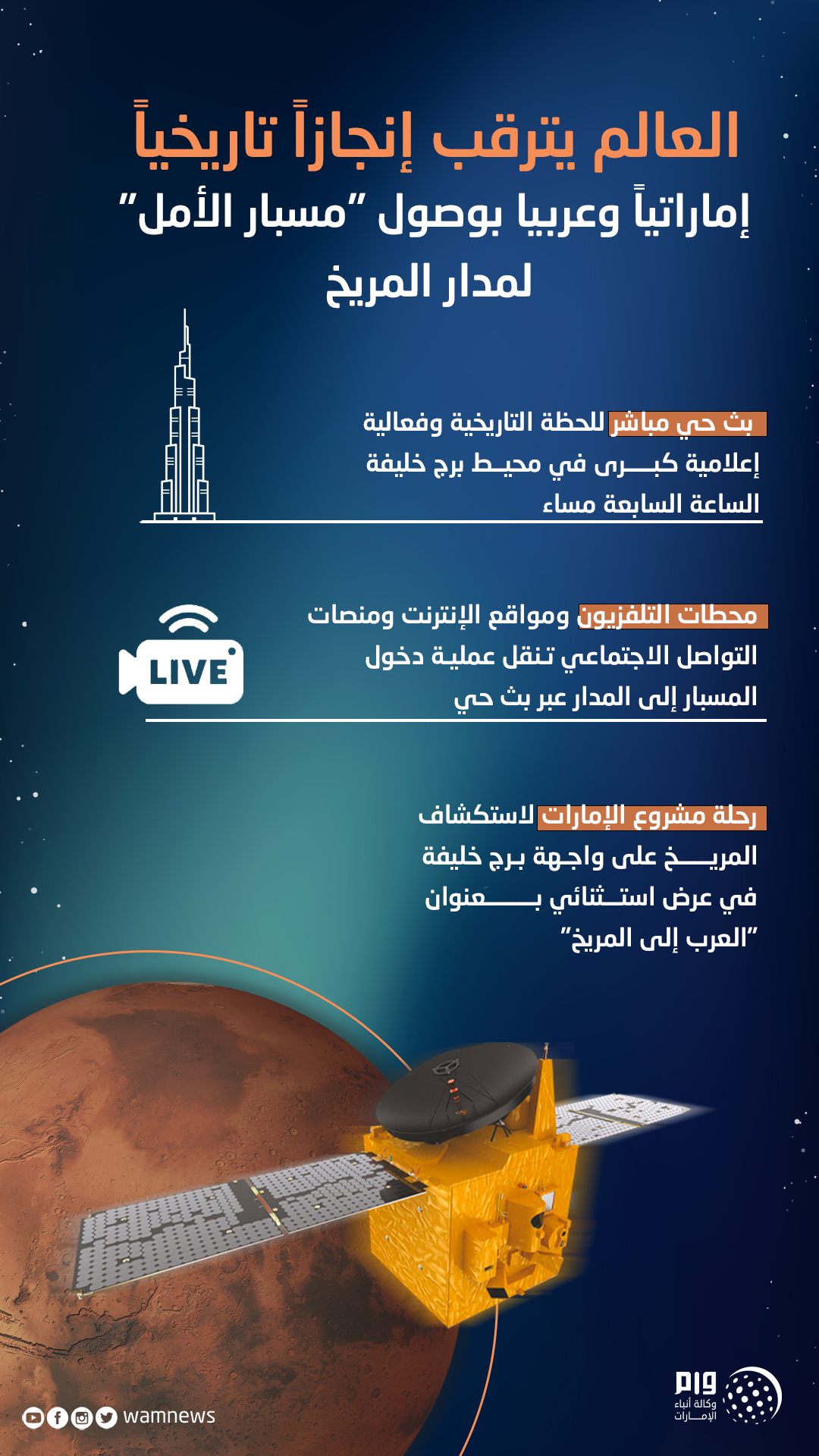 DUBAI, 8th February, 2021 (WAM) -- While millions in the UAE, the Arab region and the entire world are anticipating the historical moment when the Hope Probe completes its journey to orbit Mars tomorrow, on Tuesday, His Highness Sheikh Mohammed bin Rashid Al Maktoum, Vice President, Prime Minister and Ruler of Dubai, today tweeted, "Tomorrow, we will commemorate fifty years of the Union by celebrating our arrival to the planet, Mars. We celebrate the outcomes of the efforts of Sheikh Zayed and Sheikh Rashid to invest in human capital. Tomorrow, we will start preparing for the next 50 years, and we will prove to the world that the UAE and the Emirati people are capable of doing the impossible. Tomorrow, we shall arrive at the furthest point in the universe."

There is a state of anticipation at the news of the Hope Probe’s success in reaching the orbit of Mars, and many news channels, internet sites and social media platforms are preparing to broadcast the event live.

The UAE Government Media Office will organise a major media event at Burj Khalifa in Dubai to showcase this historic moment in the journey of the UAE and highlight the more challenging phase of the mission, which is to enter the red planet’s orbit. The event will be attended by global news agencies, as well as local, regional and foreign media representatives, and officials and members of the Emirates Mars Mission. There will also be a live broadcast from the operations room of the Satellite Control Centre at Al Khawaneej at the Mohammed bin Rashid Space Centre.

During the event, Sarah bint Yousif Al Amiri, Minister of State for Advanced Sciences, who chairs the UAE Space Agency, will present, in detail, the phases of the Hope Probe mission, from its inception as an idea to the probe orbiting the planet. Eng. Omran Sharaf, Project Manager of the Emirates Mars Mission, will explain the latest developments related to probe.

The media event will involve several stages highlighting the probe’s journey, how the UAE achieved its dream to reach space and its realisation with Emirati hands. The event will also witness several interviews with members of the mission.

The journey to be showcased at Burj Khalifa The event will comprise an impressive laser show at Burj Khalifa, the highest man-made skyscraper in the world, showcasing the journey of the Hope Probe and the efforts of the Emirati cadres who made this dream come true.

The public may follow the live broadcast of the moment when probe orbits Mars through the link, "www.emm.ae/live."