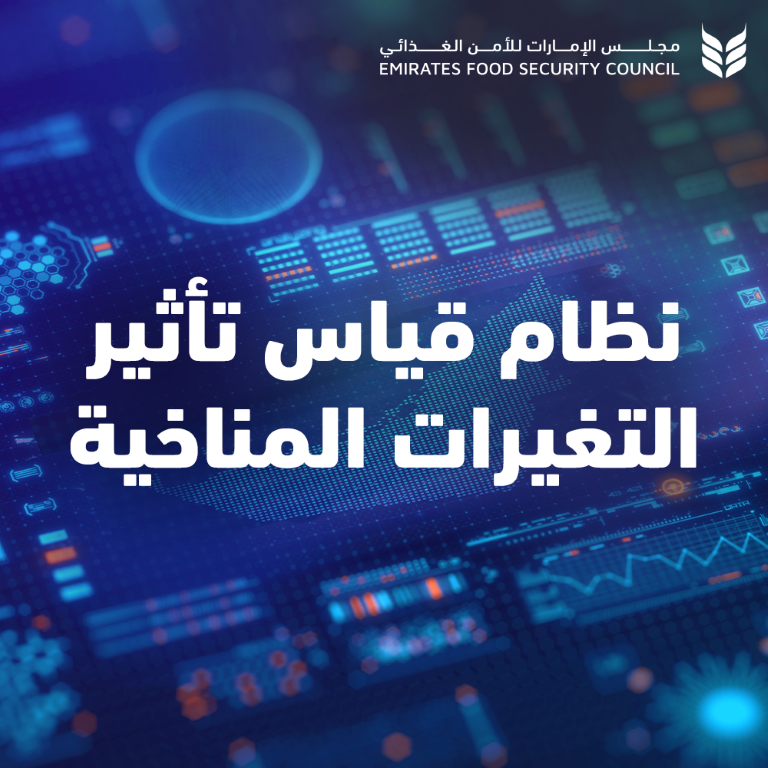 DUBAI, 26th April, 2021 (WAM) -- The Emirates Food Security Council has approved the creation of a new system to tackle the potentially negative impacts of a warming planet on the country’s food systems. Titled the ‘Climate Change Impact System,’ the tool is being developed over the next coming months with the aim of supporting food security in the UAE in the context of rising global temperatures.

As well as promoting UAE food security by providing valuable data to allow for informed decision-making over appropriate actions and areas for investment, the Climate Change Impact System forms part of the UAE’s commitment to supporting the vision and objectives of the Leaders’ Summit on Climate, which took take place on April 22-23, with the UAE one of 40 countries invited to participate by US President Joe Biden.

The system also comes in line with the Agricultural Innovation Mission for Climate (AIM for Climate) which was unveiled during remarks made by His Highness Sheikh Mohammed bin Rashid Al Maktoum, Vice President, Prime Minister and Ruler of Dubai, during the summit, aimed at intensifying and accelerating global innovation and research and development efforts in all aspects of the agricultural sector over the next five years to reduce the repercussions of climate change.

Dr Sultan Ahmed Al Jaber, Minister of Industry and Advanced Technology and the UAE Special Envoy for Climate Change, said, "The Climate Change Impact System is an important contribution to the UAE’s capacity for strengthening food security and will create an ecosystem for innovation and smart investment. The initiative is also a great example of embracing climate action to enhance economic growth by generating new skills and job opportunities. The agricultural and food sector is one of the most promising engines to deliver benefits for the UAE and the broader regional and global economy. The Impact System will strengthen our competitiveness, while simultaneously improving food security."

Mariam Almheiri, Minister of State for Food and Water Security and Chairwoman of the Emirates Food Security Council, said, "Climate change is the most pressing issue facing the global community and urgent action is needed to tackle it before we reach the stage of no return. Food systems are integral to how we address climate change as they are not only one of its largest contributors, they are also the sector most heavily impacted by it. In short, food systems are both the current problem and the future solution to climate change,"

"The Climate Change Impact System will also support the UAE's efforts to achieve the goals of the Agricultural Innovation Mission for Climate, and to contribute to creating a global model for enhancing food security in a way that serves global climate goals. By creating sustainable food systems that increase yield while minimising the use of both resources and non-renewable energy, we can reduce the contribution of the agricultural sector to climate change, which will – in turn – lead to healthier food systems and a healthier planet. This is a positive feedback loop that we need to start creating now and the Climate Change Impact System aims to be an important part of the process," she added.

Dr. Tarifa Al Zaabi, Acting Director General of UAE-based International Center for Biosaline Agriculture (ICBA), said "The development of adaptation and mitigation strategies and innovations supported by evidence-based research is crucial for sustainable agriculture and food security in marginal environments where the impact of climate change is likely to be significant. This is why ICBA designs advanced decision support tools and provides them to different countries to aid in national efforts on climate change adaptation and mitigation. ICBA also builds in-country capacities in climate change modeling and drought monitoring. These tools play an important role in determining and quantifying the potential impacts of future climate conditions on water resources and agricultural systems. They provide a solid basis for decision-making processes as regards adaptation and mitigation strategies, as well as management and investment plans and policies. However, it is very important to partner with key stakeholders to develop and adopt such tools at local, regional and international levels."

Underpinning the Climate Change Impact System is the importance of understanding the potential impacts of climate change on food production in the UAE and in partner countries that supply significant quantities of its food. It is being predicated on the observed trends of global temperatures rising by 0.33 C per decade since 1971 and which are projected to increase between 2 C and 5 C by the end of the century.

The system will examine the best ways of combating heat stress in agriculture, which impacts Controlled Environment Agriculture (CEA) systems (such as greenhouses) through an increase in energy and water consumption and a decrease in fruit quality. The UAE’s National Food Security Strategy has identified CEA technologies and applications as a catalyst to achieve innovation-driven yield improvement and enhanced growth in the local production of main food items.

The system will build on existing data and trends of meteorological information among others to assess and formulate an alogarithm predicting current and future climate related changes which will benefit investors, farmers and government bodies in the following areas: 1- enhanced feasibility studies of potential Agro-projects in the UAE. By, enabling a better assessment of future operating cost variance due to climate change which will impact main cost components of water consumption, uses of material, maintenance requirement and energy consumption.

2- Decide on the most suitable application of CEA compatible with site/area specific climate current and future characteristic. This will reduce the risk of the project and ensure system compatibility throughout the project cycle.

Over the course of the next three years the Climate Change Impact System will draw heavily on local and international tools to generate analysis and prediction modelling, with the expertise of the United Nation’s Food and Agriculture Organisation utilised through its Modelling System for Agricultural Impacts of Climate Change (MOSAICC) - an integrated package of models that allow users to assess the impact of climate change on agriculture. International experience and knowledge are also expected to be sought from research centres, scientific institutions and universities abroad.

Local expertise will be garnered from relevant government entities and education establishments that have a focus on innovative and technology enabled food production.

Playing a major role in the initiative will be the UAE-based International Center for Biosaline Agriculture (ICBA) - a not-for-profit agricultural research centre that has a unique focus on creating crops that can thrive in marginal environments. Since 2010, the ICBA has worked on adapting models to local conditions in the UAE, Morocco, Tunisia, Jordan and Lebanon, giving it unrivalled experience in creating agricultural models for demanding environments.