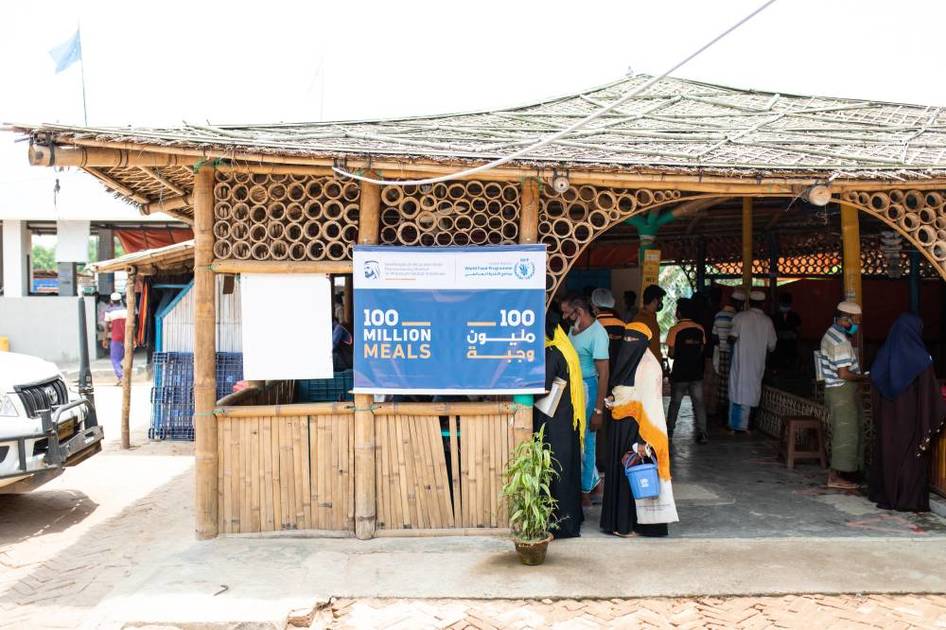 As part of the campaign, the United Nations World Food Programme (WFP) distributed e-vouchers to enable around 36,000 refugees to purchase their own food from stores, shops and bakeries in Rohingya refugee camps in Cox’s Bazar, according to a press release issued on Monday.

The e-vouchers distribution, equipped with biometric identification technologies, was carried out in collaboration with a network of local authorities, as part of ‘100 Million Meals’ campaign that aims to provide food aid to disadvantaged communities across 30 countries in four continents.

Under a strategic partnership with the campaign’s organiser Mohammed bin Rashid Al Maktoum Global Initiatives (MBRGI), WFP is facilitating food aid in Palestine, Jordan and Bangladesh where it already operates.

Through e-vouchers, WFP provides beneficiaries with direct access to fresh local produce, fish and poultry from a series of shops and groceries available inside the camps, providing an opportunity to lead a dignified life while boosting local commercial activity.

Al Nuaimi added, "MBRGI is keen to forge partnerships with regional and international organisations to provide essential needs to the largest scope of beneficiaries across the world."

Mageed Yahia, WFP Director in the UAE and Representative to the GCC, said, "we are grateful for MBRGI’s valuable contribution in Bangladesh that comes at a time when Rohingya refugees are more vulnerable than at any point since the 2017 influx. Food security in Cox’s Bazar remains a top priority with 96 percent of all refugees being moderately to highly vulnerable and entirely dependent on humanitarian assistance. Only by building strong long-term partnerships and coming together as communities, we are able to fight hunger and malnutrition among Rohingya refugees and host communities."

The ‘100 Million Meals’ campaign succeeded in doubling its goal and collecting donations, equivalent to 216 million meals, to be distributed in low-income communities across 30 countries in the Middle East, Asia, Africa, Europe, and Latin America. The ‘100 Million Meals’ campaign coordinates its efforts with the Mohammed bin Rashid Al Maktoum Humanitarian and Charity Establishment, UN WFP, Food Banking Regional Network, as well as local authorities and charity organisations in beneficiary countries to ensure swift and wide-ranging delivery of food aid.