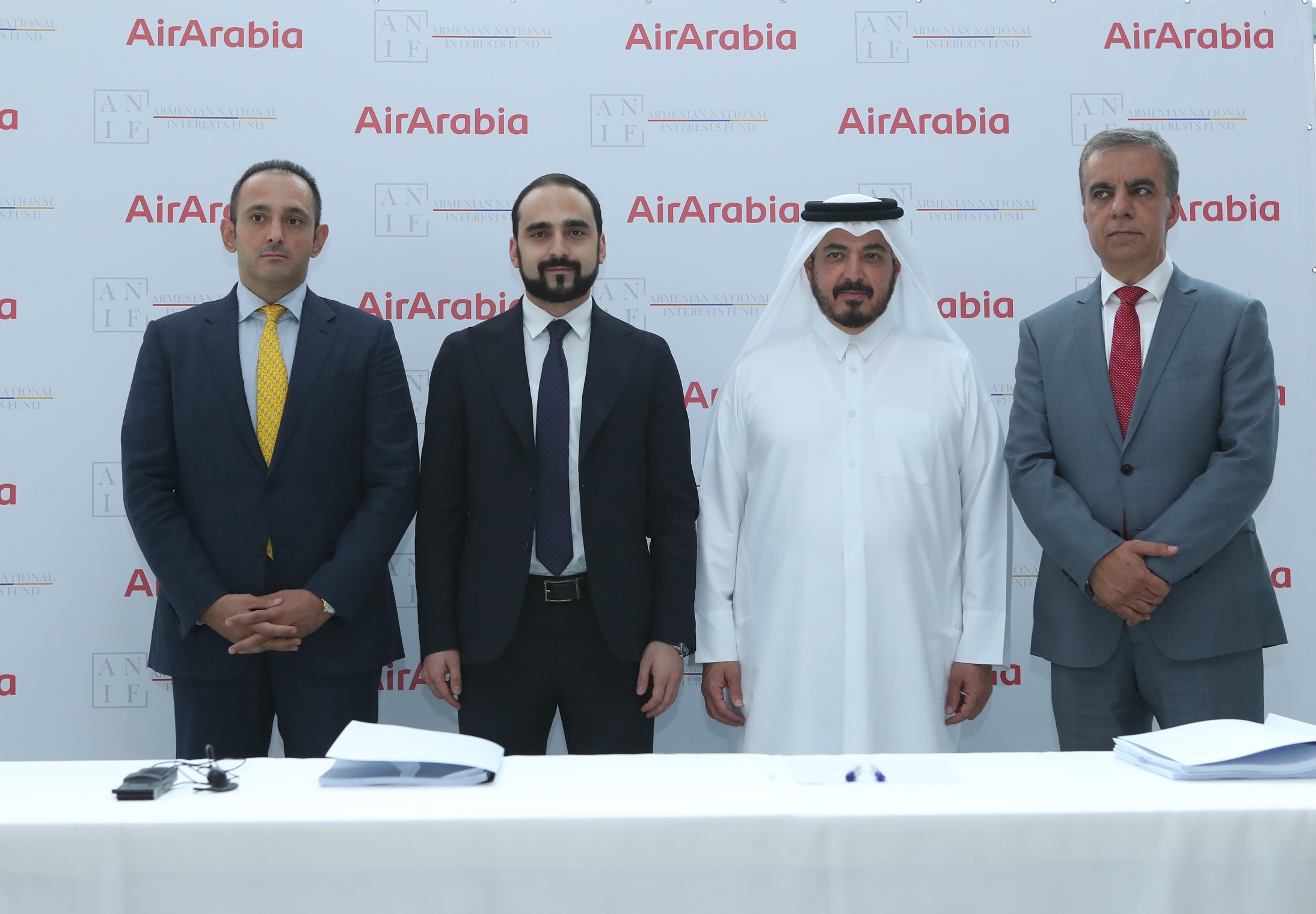 YEREVAN, 14th July 2021 (WAM) - The Armenian National Interests Fund (ANIF) and Air Arabia, the Middle East and North Africa’s first and largest low-cost carrier (LCC) operator, today announced the signing of an agreement to launch Armenia’s new national airline. The agreement will see the establishment of an independent joint venture company that will operate as a low-cost passenger airline with Yerevan’s Zvartnots International Airport (EVN) as its base.

The announcement was made following a signing ceremony and a press conference held today at Yerevan’s Zvartnots International Airport and attended by Tigran Avinyan, Deputy Prime Minister of Armenia and Sheikh Abdullah bin Mohammed Al Thani, Chairman of Air Arabia.

The new national airline will serve the strategic vision of Armenia’s fast-growing travel and tourism sector as well as contributes to the country’s economic growth, while providing Armenians with a reliable and value for money air travel.

David Papazian, Chief Executive Officer of ANIF, said: "We are excited to launch a new national low-cost carrier for Armenia that will contribute significant value to the economy and energise our travel and tourism sector. This builds on our commitment to partner with top global entities on transformational projects that catalyse our crucial economic sectors. Air Arabia has a well-established track-record in launching and operating successful LCCs, and its knowhow will be a differentiating strength of the new airline."

Adel Al Ali, Group Chief Executive Officer of Air Arabia, said: "We are delighted at Air Arabia Group to partner with ANIF on this joint venture to launch Armenia’s new national low-cost carrier. We see tremendous potential for Armenia in building its airline sector, which will add sustained value to the economy through job creation and the development of travel and tourism sector. We thank ANIF and the Civil Aviation Committee for their trust and we look forward to working hand in hand to develop the new airline, which will serve as a value-for-money air travel option for Armenians and visitors to the country."

Tatevik Revazian, Chair of the Civil Aviation Committee of Armenia, said: "Our vision for Armenia is to significantly improve air connectivity and as a result bring economic growth and jobs to the country. Having a strong national low-cost airline is essential for the development of Armenia’s air transport sector, especially as a tool to recover faster from the COVID-19 crisis. This partnership between ANIF and Air Arabia Group to launch a new airline reflects this vision. We are confident that the expertise Air Arabia brings to the JV will support the seamless launch and growth of the carrier. We look forward to the success of Armenia’s new national airline."

The name of the airline will be decided by the people of Armenia through an open competition that starts today and lasts for four weeks, whereby Armenian’s wishing to participate can send their name suggestions to nametheairline@anif.am. The last day for participating is August 14th after which the company’s board of directors will go through received suggestions and select the final name.

Based in Yerevan, the new company will adopt the low-cost business model operated by Air Arabia. Work on securing the Air Operating Certificate (AOC) - which allows the airline to start operating- will commence shortly. More details about the launch date, fleet, and destination network will be announced in due course.

Over the course of the past decade, Armenia has recorded some impressive gains as its tourism industry begins to recognize its full potential. The Armenian travel and tourism sector contributed to nearly 11.8 percent of the country’s GDP in 2019 and accounted for 12.5 per cent of the total employment.