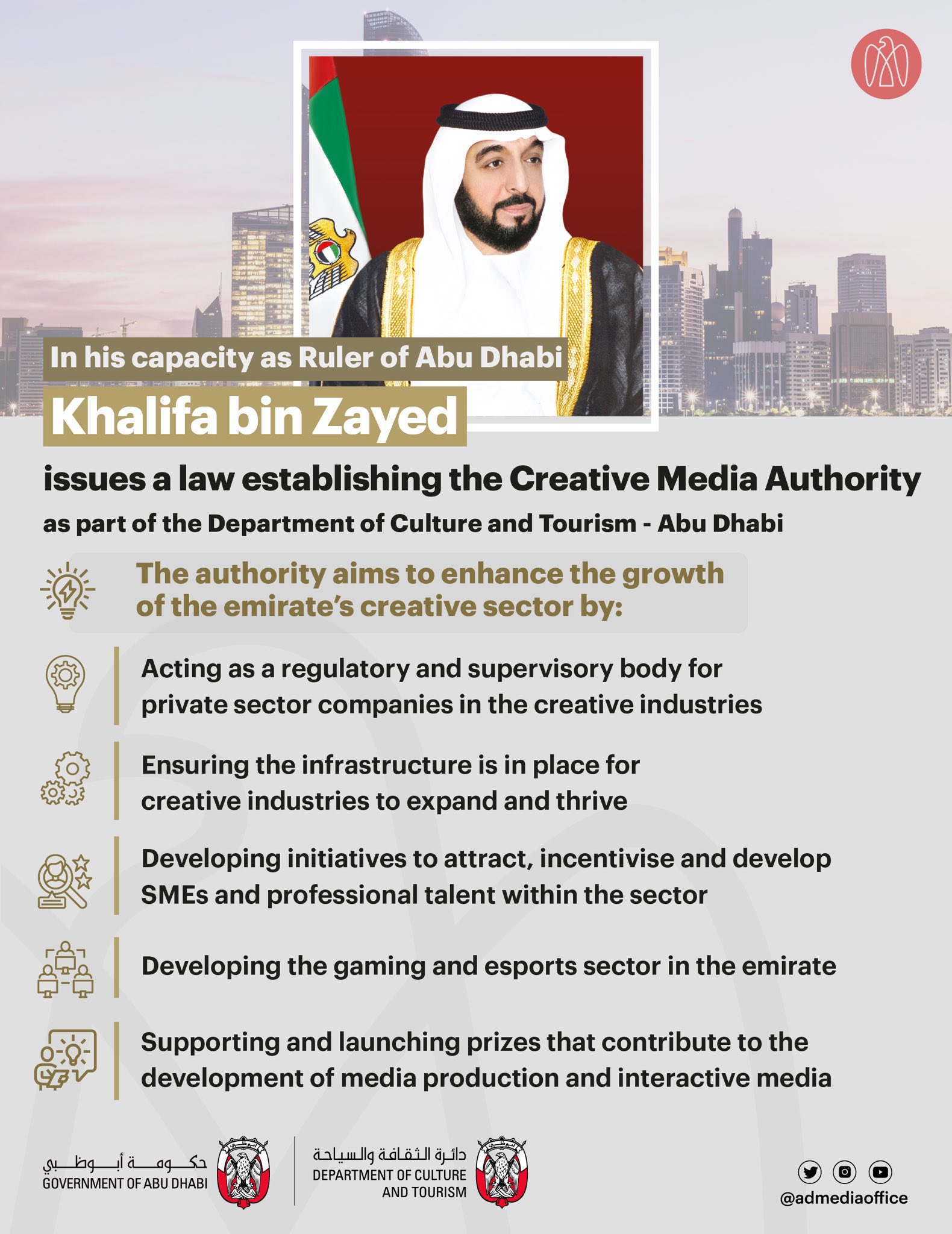 ABU DHABI, 15th September, 2021 (WAM) -- Following the issuance of a law by UAE President His Highness Sheikh Khalifa bin Zayed Al Nahyan, in his capacity as Ruler of Abu Dhabi, establishing the Creative Media Authority (CMA), the Department of Culture and Tourism - Abu Dhabi (DCT Abu Dhabi) has launched the authority with a mission to accelerate the growth of Abu Dhabi’s multidisciplinary creative sector. The new entity is the latest milestone in the emirate’s AED 30+ billion investment strategy to expand the entire Culture and Creative Industries (CCI).

As part of the DCT Abu Dhabi, the Creative Media Authority will play a key role in furthering Abu Dhabi’s strategy for the Culture and Creative Industries by creating a powerful alliance of interconnected creative domains.

The new entity will also oversee a range of talent development programmes to nurture the next generation of skilled professionals working in sustainable creative careers, as well. as grow the burgeoning gaming and esports sector in the emirate, and support and launch prizes that contribute to the development of media production and interactive media.

Commenting on the launch of the Creative Media Authority, Mohamed Khalifa Al Mubarak, Chairman of DCT Abu Dhabi, noted that the Culture and Creative Industries are key drivers of social and economic growth and diversification in Abu Dhabi, and that by harnessing the natural synergies in these sectors, DCT Abu Dhabi’s Culture and Creative Industries Strategy is enabling the development of outstanding facilities, world-class talent and diverse opportunities.

He added that with the launch of the Creative Media Authority, various sectors are being unified into a single sustainable ecosystem that will enable creative individuals and businesses to express themselves and reach new levels of commercial success, further bolstering Abu Dhabi’s flourishing culture and creative scene.

The establishment of the Creative Media Authority is part of an AED 30+ billion, 10-year investment strategy across Abu Dhabi by both the public and private sectors to develop the emirate’s culture and creative infrastructure, with AED 8.5 billion invested over the past five years and a further AED 22 billion being rolled out in the next five years. The move brings the CCI industry under one umbrella, as DCT Abu Dhabi now consolidates Abu Dhabi’s multidisciplinary domains such as film and TV production, popular music, gaming and esports with cultural fields such as heritage, crafts and design, publishing, performing arts, and visual arts, as well as the Arabic Language Centre.