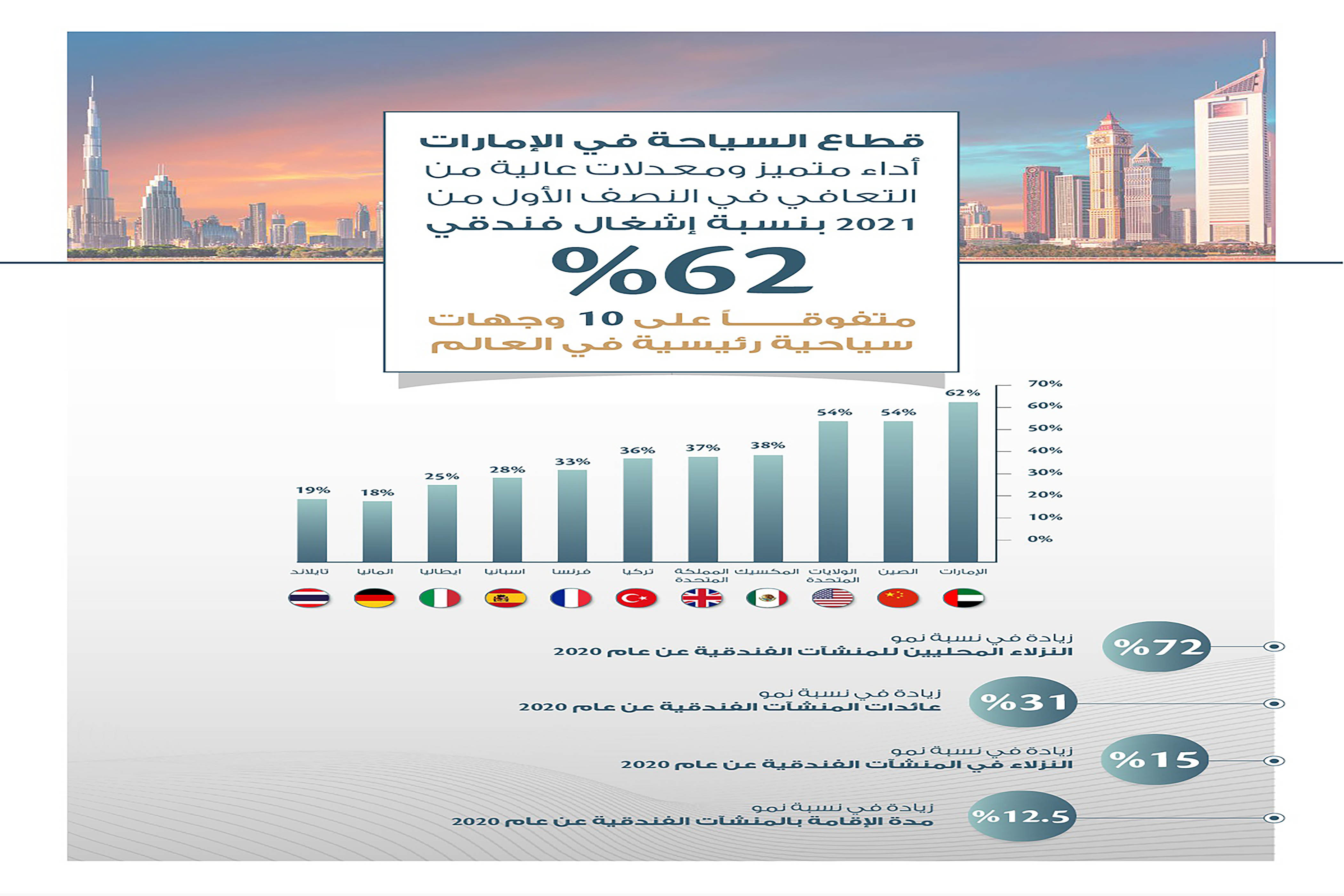 The country’s hotel and tourism establishments attracted nearly 8.3 million guests during this period, recording 15% growth compared to that of H1-2020. During the reference period, guests spent nearly 35 million nights in the UAE hotels reflecting a growth of 30%, while the average length of their stay increased to 4.1 nights at a 12.5% growth. This's accompanied by a 31% growth in hotel establishments’ revenues to reach AED11.3 billion. Domestic tourism accounted for 30% of the total number of guests at these hotel establishments.

Dr. Ahmad Belhoul Al Falasi, Minister of State for Entrepreneurship and SMEs, and Chairman of the Emirates Tourism Council, affirmed that the positive results achieved by the tourism sector in the first half of this year reflect the soundness of the vision and directives of the wise leadership on the importance of the tourism sector as a major driver of the economy. They highlight the strength and flexibility of the national tourism sector, the development of the UAE’s tourism market and the diversity of its products, and the efficiency of national campaigns in highlighting the tourism components that characterize the country. In addition, they shed light on the unique and diverse destinations housed by the seven emirates of the country; and the continuous development and excellence of their hospitality features and services. He noted that the latest achievement is a result of concerted government efforts aimed at developing domestic tourism to attract larger numbers of domestic and foreign tourists.

He pointed out that these results are of great relevance in light of the tightening of travel restrictions in some major tourism markets around the world due to the impact of COVID-19. It reflects guests’ trust in the national tourism products, and their competitiveness in establishing themselves as preferred choices for the country’s citizens and residents, compared to other foreign tourist destinations.

He explained that the qualitative development witnessed by the UAE’s domestic tourism landscape and the growing demand for tourism destinations and hotel facilities within the country confirm the effectiveness of government initiatives to boost domestic tourism.

Furthermore, the minister underlined the UAE's continued efforts to consolidate its leading position on the global tourism map, and to achieve progress on various international indicators for tourism and hotel services, noting that the growth of tourism in the country confirms the growing global confidence in the preventive measures taken to ensure the health and safety of hotel guests and visitors.

He also noted that the high vaccination rates in the country, which is at 80% now, is one of the highest in the world, which has contributed to raising the level of safety and confidence in the UAE’s tourism sector.

He further explained that the authorities concerned with tourism development in the country continue their joint efforts and coordination to increase the growth of UAE tourism in the next phase through qualitative projects and initiatives, including preparation for the internal tourism campaign during the next session. It will also see the launch of external tourism promotional campaigns with the aim of opening new markets to attract tourists to the country. In addition, he highlighted the importance of hosting the global event Expo 2020 Dubai in October and world delegations from more than 192 countries, which will give a great boost to the country’s tourism sector, leading to further progress in hotel sector growth indicators, hotel occupancy rates and tourism activity in general.

In this context, Haitham Matar, President of InterContinental Hotels and Resorts Group for India, Middle East and Africa, explained that thanks to the support of the UAE government and the clear vision it adopts in developing the tourism sector and enhancing its leadership, competitiveness and sustainability, the sector has achieved remarkable growth and recovery in the past period, which is confirmed by the strong performance of the portfolio of the Group's hotels in the UAE.

Matar also emphasised on the distinguished role of the tourism authorities in the country and the distinctive national tourism initiatives such as the ‘Coolest Winter in the World’ campaign, which greatly supported local tourism, fuelling a growth in demand and an increase in reservations.