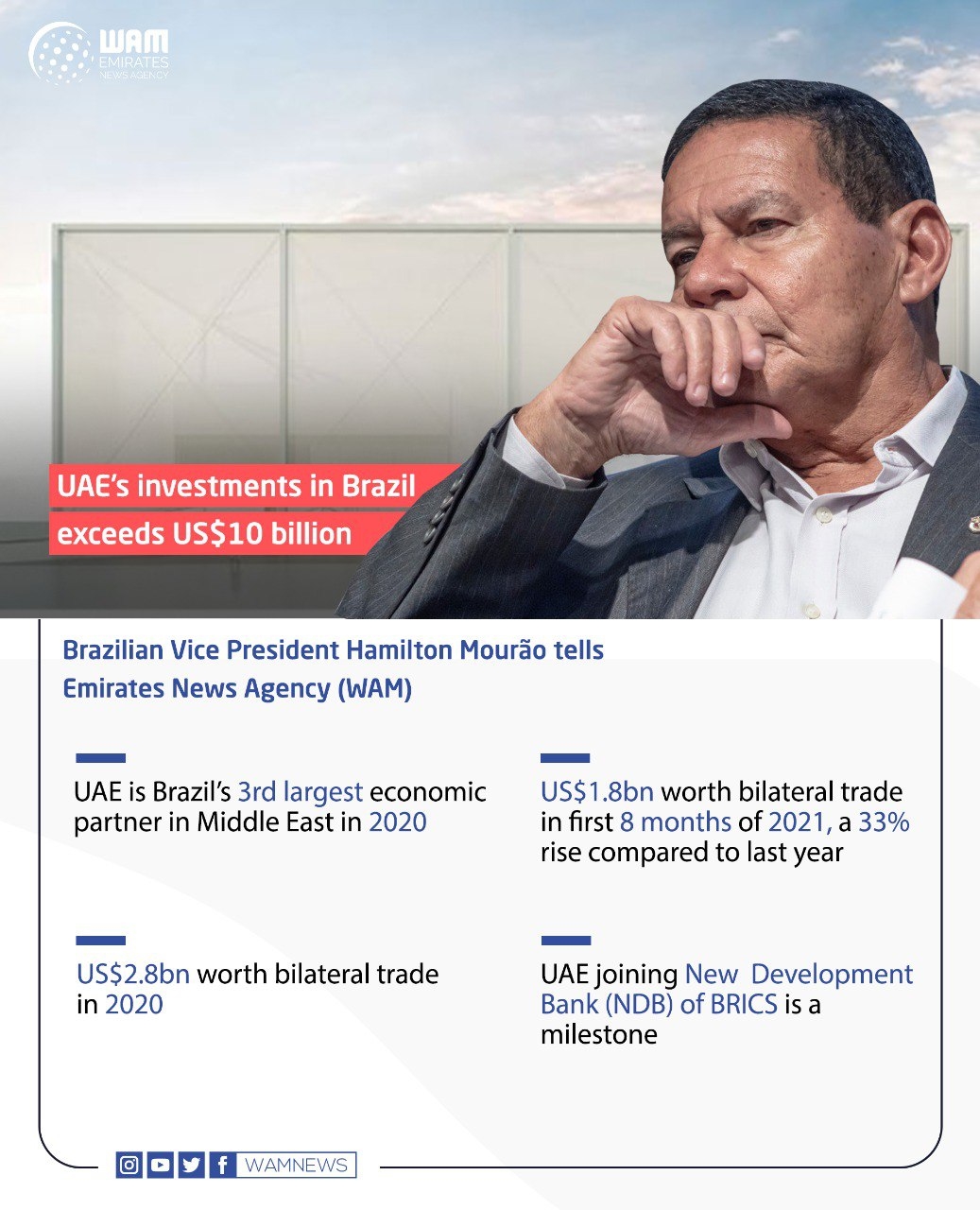 DUBAI, 3rd October, 2021 (WAM) -- The economic relations between Brazil and the United Arab Emirates have successfully overcome the negative impacts of the global pandemic, with bilateral trade witnessing a 33 percent increase in the first eight months of 2021, compared to the same period last year, according to a top Brazilian official.

In an exclusive interview with Emirates News Agency (WAM), Brazilian Vice President Hamilton Mourão added that the bilateral investments also had an upswing, with UAE’s investments in Brazil exceeding US$10 billion.

"We have very solid economic relations which can be seen in the growing flows of trade and investments. I see it as extremely positive. The UAE is Brazil’s third-largest economic partner in the Middle East in 2020, with bilateral trade reaching US$2.8 billion," revealed the Vice President who is on a four-day working visit to the UAE.

"This year we can see a strong increase in bilateral trade that reached US$1.8 billion in the first eight months [until August], it is plus 33 percent compared to the same period last year. So we are progressing [despite the global pandemic]".

As WAM reported earlier the Brazil-UAE bilateral trade in 2018 stood at US$2.6 billion, which went up to US$2.81 billion in 2019. The US$ 2.8 billion trade in 2020 shows that there was only a negligible decrease compared to 2019, although the global pandemic heavily affected the global trade last year.

The Vice President explained that Brazil this year exported to the UAE, mainly poultry and meat, which constituted 38 percent of total exports, gold (17 percent), and beef (12 percent). In turn, Brazil imported mainly platforms and vessels (62 percent), petroleum (22 percent) from the UAE.

The Vice President inaugurated the Brazilian Pavilion in the Expo 2020 Dubai on Friday evening.

Talking about the relevance of the New Development Bank (NDB) set up by the BRICS group of nations admitting the United Arab Emirates in September, Mourão said, "Other countries are looking with envy at the UAE. They want to join the NDB, too. The UAE’s membership is a milestone in the bank’s expansion plans to be the premier development institution for emerging economies."

"The UAE is an expansive financial centre and one of the world's most dynamic economies, and now it has joined the NDB in the first membership expansion of the bank," the Vice President pointed out.

The NBD, since established in Brazil in 2014, aims to mobilise resources for infrastructure and sustainable development projects in developing and emerging countries, he explained.

The bank has approved about 80 projects in its member countries, which is about a US$30 billion portfolio covering areas such as transportation, sanitation, clean energy and urban development, Mourão noted.