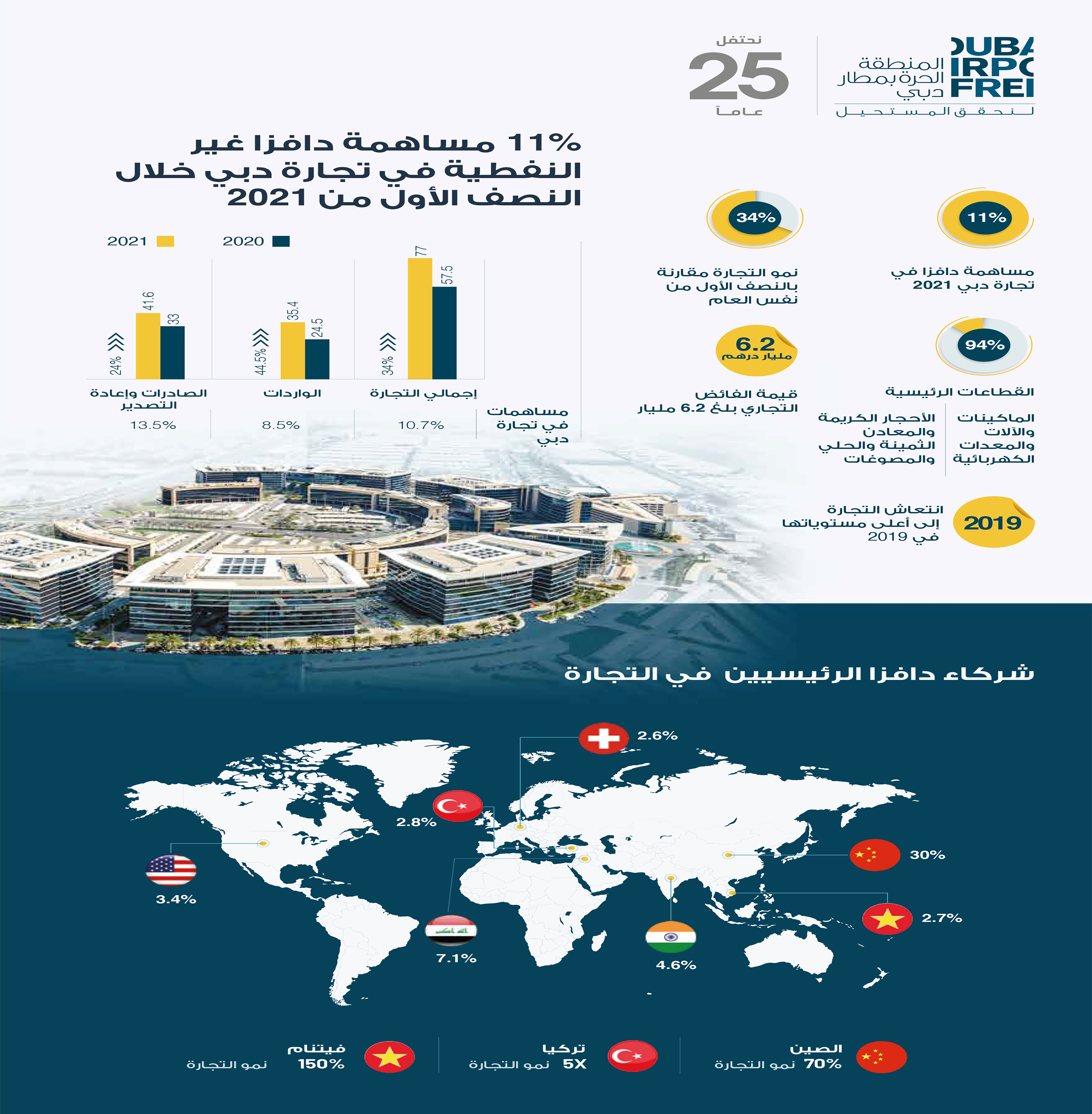 DUBAI, 6th October, 2021 (WAM) -- The Dubai Airport Freezone Authority (DAFZA) announced that its contribution to Dubai's non-oil foreign trade for the first half of 2021 reached 11 percent. H1 trade in the Freezone grew 34 percent from the same period last year to reach AED77 billion, with a trade surplus of AED6.2 billion.

Imports recorded a growth of 44.5 percent in the first half of the year compared to the corresponding period last year, reaching AED35.4 billion, which represents 8.5 percent of Dubai's total imports. In terms of re-exports, DAFZA grew 24 percent to total AED40.8 billion, representing 20.5 percent of Dubai's total non-oil foreign trade. Exports saw a 501 percent growth compared to the same period of the previous year.

These results reflect Dubai’s success in reinforcing its role as a global trade hub and becoming a key player in the worldwide supply and trade chain. The strong growth figures, achieved despite disruptions to the movement of goods, trade chains and economic cycles due to the pandemic, demonstrate the agility and proactivity shown by the UAE and Dubai in spurring recovery through innovation and strong support for investors and businesses.

H.H. Sheikh Ahmed bin Saeed Al Maktoum, Chairman of DAFZA, stated, "DAFZA's latest statistics show that Dubai is returning to pre-pandemic growth levels, guided by the vision of His Highness Sheikh Mohammed bin Rashid Al Maktoum, Vice President, Prime Minister and Ruler of Dubai. We’ve overcome the pandemic’s challenges by creating opportunities and strengthening our resilience as well as supporting businesses in easing the impact of COVID-19 as well as assisting them in resuming growth. DAFZA has worked with diligence to tide over the repercussions of the pandemic with plans aimed at achieving specific targets. DAFZA's H1 results reflect the world's trust in the UAE's trade ecosystem and a return to its rapid economic growth momentum.

"Dubai is on track to achieve its foreign trade target of AED2 trillion over the next five years. To realise this, it is strengthening foreign connections and adding 200 new cities to its network of global trade partners. In addition, DAFZA is continuing to grow its trade movement, with more strategic initiatives that elevate its services, customs facilities, as well as investment and commercial incentives."

Dr. Mohammed Al Zarooni, Director General of the Dubai Airport Freezone Authority, stated, "We were able to turn the challenges brought by the COVID-19 pandemic into opportunities and continue our efforts to raise the quality of services offered to businesses, investors, merchants, entrepreneurs and companies headquartered in DAFZA. This was done to support their ability to enhance trade movement, whether in terms of imports, exports, or re-exports. DAFZA's results confirm the success of our efforts. We will continue to work to increase these numbers in line with the leadership's directives to expand the UAE's non-oil foreign trade over the coming years."

In terms of imports, China came in first at 65 percent, followed by India at 8 percent, and both Turkey and Vietnam at 5.8 percent. Iraq came in first in exports and re-exports at 13.1 percent, while the USA accounted for 5 percent.