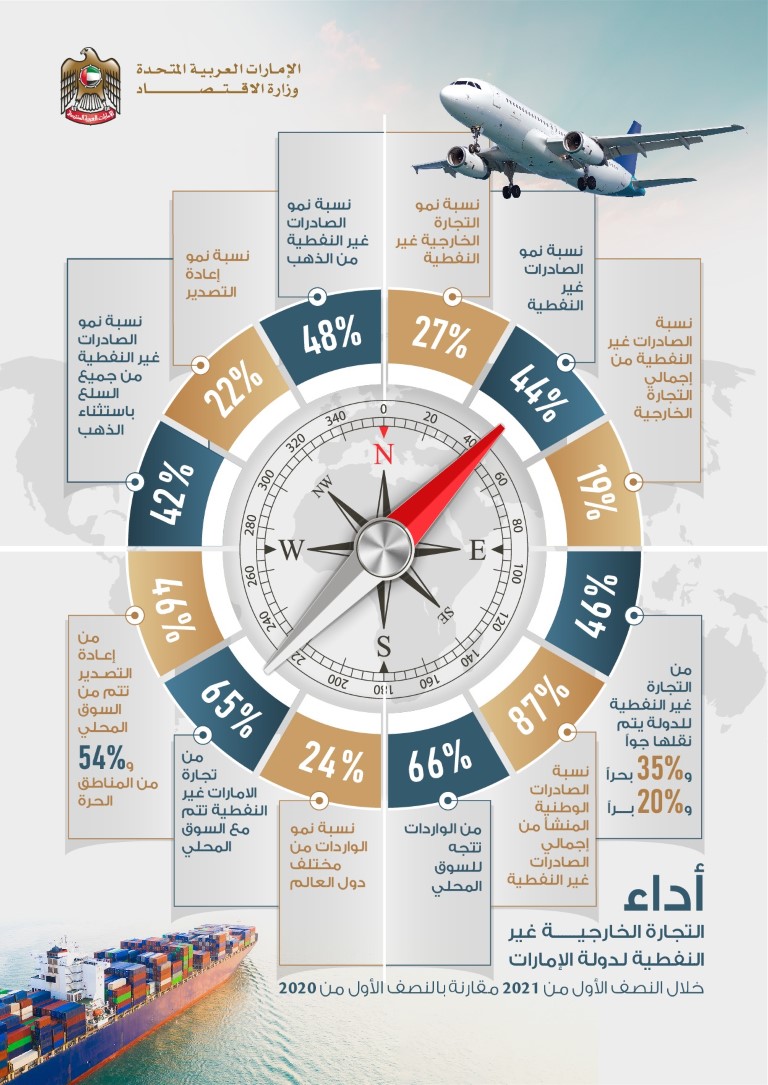 Dr. Thani bin Ahmed Al Zeyoudi, Minister of State for Foreign Trade, said that the non-oil foreign trade data for the first half of 2021 reveals a significant and promising growth in the total volume of trade over the past two years, despite the pandemic’s impact on the global trade movement. Furthermore, significant growth in non-oil exports is a clear indication of the rapid recovery and the return to the growth trajectory and the overall growth in the country’s foreign trade movement in general and in promoting national non-oil exports particularly.

"These indicators confirm the efficiency of the forward-looking vision and proactive plans implemented by the UAE under the guidance and support of its wise leadership to deal with the pandemic’s impact on the foreign trade sector. It shows the country’s success in developing flexible, open and long-term policies to maintain the attractiveness of its trade and business environment. These efforts consolidate the UAE’s position as a leading and competitive trade hub connecting the East and West and a major player in ensuring the continuity and growth of global supply chains. What we see today is a testament to the success of our efforts in this direction. The latest figures confirm the distinguished position of the UAE as a vital regional and global trade hub and an influential player that contributes to reshaping the global trade landscape to make it more flexible and sustainable with the aim of restoring the pace of activity and growth in the post-Covid era," Al Zeyoudi added.

Al Zeyoudi added that the country's promising foreign trade figures coincide with the launch of the ‘Projects of 50,’ which was recently announced by the UAE government to contribute to enhancing country's trade performance during the next stage. It includes qualitative and strategic initiatives such as comprehensive economic agreements with a number of targeted global markets, and the 10×10 export development program designed to provide an additional incentive to strengthen the UAE’s comprehensive economic and trade partnerships with countries around the world continuously discover new trade markets for the UAE. He added: "In light of these integrated and pioneering efforts, we expect the country's non-oil foreign trade to continue its positive performance during the remaining months of the year."

The total value of imports during the same period exceeded AED482 billion indicating a growth of 24% compared to H1 2020 and 3% compared to H1 2019. Up to 66% of the imports go to the local market and 34% to free zones and customs warehouses.

The study conducted by the Ministry further indicated that with regard to the total non-oil trade of the country, 65% of it is with the local market, while free zones and customs warehouses account for the remaining 35%. The study also showed that 46% of this trade takes place by air, 35% by sea, and 20% by land.