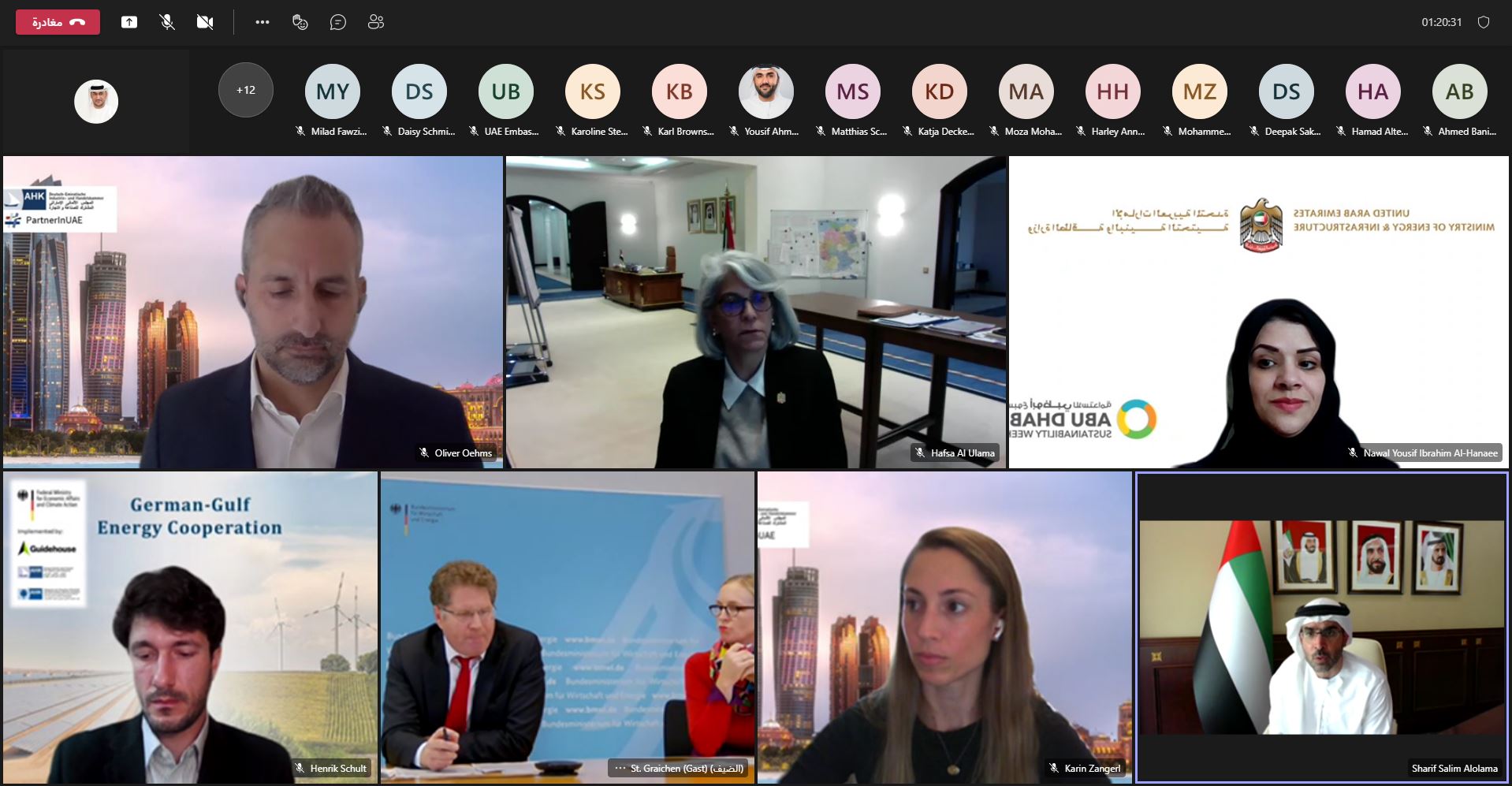 ABU DHABI, 18th January, 2022 (WAM) -- A virtual meeting between the task force from the 'Declaration of Intent' of the joint cooperation signed by the UAE and Germany in 2017, discussed cooperation between the two countries for green hydrogen production and support projects in the area.

The meeting was held on the sidelines of the Abu Dhabi Sustainable Week (ADSW) hosted by Abu Dhabi.

Sharif Al Olama, Under-Secretary of the Ministry of Energy and Infrastructure for Energy and Petroleum Affairs, chaired the sixth meeting with Dr. Patrick Graichen, State Secretary at the Federal Ministry of Economic Affairs and Climate Action.

At the meeting, the two sides discussed renewable energy systems, including energy markets and regional connectivity. They explored regional cooperation and ways to exchange knowledge, improve energy efficiency in the industry and buildings and enhance exchanging practices in sustainable cooling systems.

They also explored climate change challenges and the possibility of making a strategic dialogue between UAE and Germany before COP28 and empowering women in the energy sector, and supporting joint initiatives and innovation centres between the two countries.

Al Olama said that the joint task force announced in November 2021, aims to boost bilateral ties in the clean energy sector, mainly the green hydrogen, through strengthening mutual, private industry, research institutes and organising a forum to discuss the challenges in the green hydrogen market and achieve Paris Agreement goals.

He pointed that both countries achieved success after five years of signing the ‘Declaration of Intent’ with hopes to endure the joint work for the benefit of both sides.

He also briefed the German officials about the developments of the UAE’s energy sector, mainly Projects of the 50, and the initiatives and ambitious projects by the country for transformation into renewable, clean energy, in line with the global targets of climate change, Paris Agreement and the UAE’s strategic initiative to achieve climate neutrality by 2050, as well as, latest preparation by the UAE for hosting the UN Climate Conference COP28 in 2023.

Al Olama said that hydrogen energy is one of the options to achieve sustainable development in the UAE with the possibility of producing from the available sources such as oil, gas, and renewable sources like solar energy and wind in addition to geothermal energy and fossil fuel sources.

He added that UAE managed to grow in the clean energy sector in a record time, mainly hydrogen as a promised future energy source.

Al Olama also invited companies, Emirati and German business community to take advantage of the bilateral ties between the two countries and discover investment opportunities in the energy, oil, gas, and hydrogen sectors which are a significant pillar of the national economy of the two friendly countries.

Al Olama, participated in a workshop titled (Enabling Global Hydrogen Trade) as part of the joint work between the two countries. The workshop was meant to exchange views on hydrogen trade, the role of the UAE and Germany in this sector, supportive plans to boost the global trade related to hydrogen transportation means, and issuing verified certificates.

The meeting was attended by Ahmed Al Kaabi, Assistant Under-Secretary for Petroleum, Gas and Mineral Resources; and Yousef Al Ali, Assistant Under-Secretary for the Electricity, Water and Future Energy Sector at the Ministry of Energy and Infrastructure; Ernst Peter Fischer, Ambassador of Germany in the UAE; Oliver Oehms, CEO of the German Emirati Joint Council for Industry and Commerce, and energy officials in both countries and representatives from the private sector.