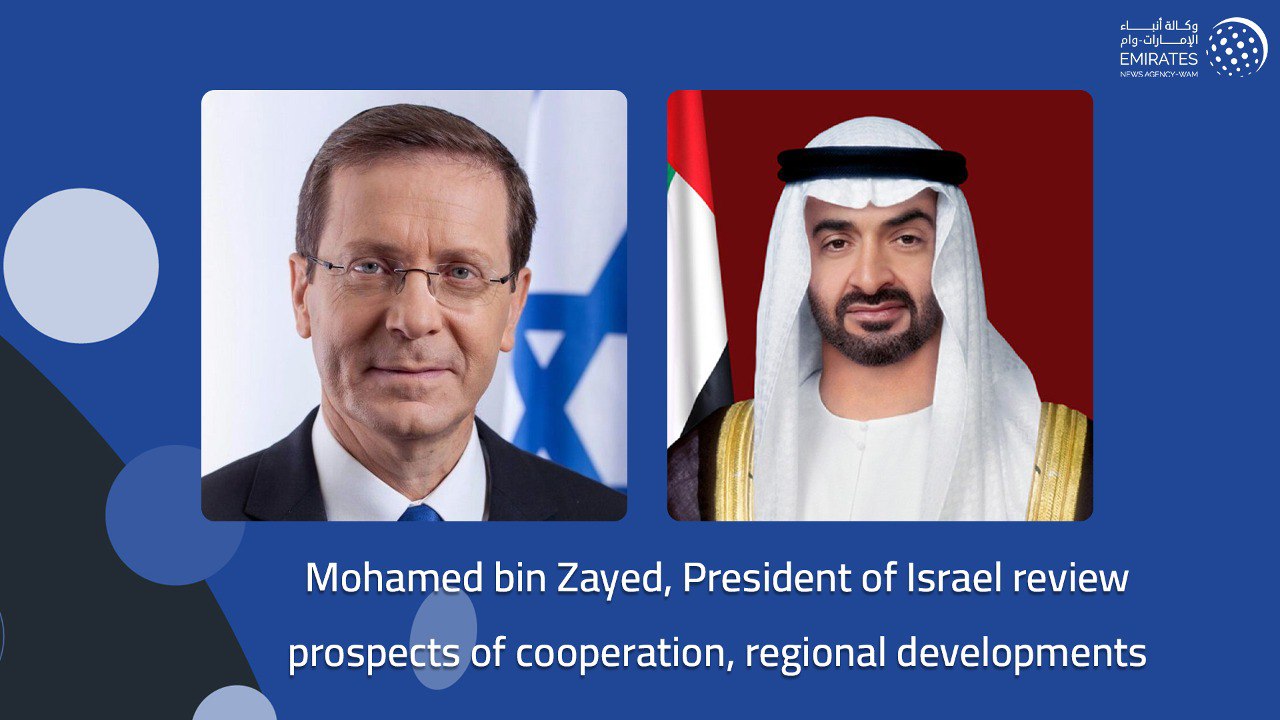 ABU DHABI, 30th January, 2022 (WAM) -- His Highness Sheikh Mohamed bin Zayed Al Nahyan, Crown Prince of Abu Dhabi and Deputy Supreme Commander of the UAE Armed Forces, and President of Israel, Isaac Herzog, today deliberated aspects of cooperation under the Abraham Accords Peace Agreement, signed by the two nations in 2020, in addition to a number of regional and international issues of interest.

This came during a session of talks held by His Highness Sheikh Mohamed and the President of Israel at Qasr Al Watan Palace in Abu Dhabi.

At the beginning of the meeting, His Highness welcomed Herzog and expressed his hope that this visit would contribute to advancing the relations between the two countries to a higher level for the higher good of their peoples and those of the region.

The two sides also reviewed the prospects of growing cooperation at all levels, especially in the economic, trade, investment, development, technology, health, and other fields.

The meeting also dealt with a number of regional and international issues of mutual concern, especially the efforts made to achieve peace, stability and development in the Middle East region for the common good and prosperity of its peoples.

During the meeting, His Highness Sheikh Mohamed thanked the Israeli president for his position and that of his country towards the recent terrorist attacks on civil facilities in the UAE.

"Your position embodies our common vision toward the necessity of addressing the sources of threats to regional stability and peace, foremost of which are the militia and terrorist forces, and the importance of adopting a firm international stance against them," Sheikh Mohamed said.

He added that the Abraham Accords Peace Agreement is a major turning point in history that embodies the UAE’s belief in peace and in opening fresh prospects for establishing bilateral partnerships, especially in areas of technology, innovation, health, energy, and other fields.

Sheikh Mohamed expressed his confidence that the two countries can present to the whole region a practical model to reap the fruits of peace, utilise available resources and capabilities and unleash the power of human mind to create a better future for all.

His Highness noted that Israel’s participation in the Expo 2020 Dubai is one of the dividends of this peace that will help deepen cooperation and partnership and identify mutual opportunities between Israel and the UAE.

"Our region is one of those that has suffered the most from wars and conflicts. Through peace, we, in the UAE, Israel and the entire region, can direct resources and energies to serving our peoples and paving the way for a better tomorrow," Sheikh Mohamed added.

He emphasised that reaching a permanent settlement to the Palestinian cause would represent a strong impetus for peace in the entire region and enhance cooperation in facing common challenges in a way that blocks the path to violent extremism that's followed by the proponents of eternal conflicts. Sheikh Mohamed prayed to Allah Almighty for peace to prevail in the Middle East Region.

For his part, the Israeli President expressed his delight with his first visit to the UAE and meeting with His Highness Sheikh Mohamed. He commended the growing cooperation between the two countries and the advanced steps they are taking to build on the Abraham Accords Peace Agreement. He also extended his thanks and appreciation for the warm welcome he received, noting that this visit means a lot to him and the people of Israel, who are looking forward to continuing to promote peaceful coexistence and the peace agreement between the two countries.

He added that his visit is reflective of the vision toward peace that he's carrying forward to the entire region. "We are both two successful countries; we have developed our nations and become a global model for success in many fields, foremost of which is how to lead and develop a country with an ambitious vision for the future," the Israeli president said.

He added that late Sheikh Zayed bin Sultan Al Nahyan laid the foundation for a brilliant future for the UAE. "You are following in his footsteps by continuing his legacy in a way that delivers a message to the entire region that there is an alternative that is peace, coexistence and cooperation for the higher good of mankind," he told Sheikh Mohamed.

"I fully agree with Your Highness that the message of peace is the cornerstone of our relationship and that we must strive for peace to achieve a better life, hope and a peaceful future for the benefit of all in the region," he added.

The Israeli president spoke of his visit tomorrow to Expo 2020 Dubai, to attend his country's celebration of its national day at the Israel pavilion, saying, "It is the most wonderful experience that everyone is talking about."

He expressed Israel's keenness to develop cooperation with the UAE in all fields to serve their mutual interests and contribute to achieving stability and development for the peoples of the entire region.

It was also attended by the delegation accompanying the Israeli President.