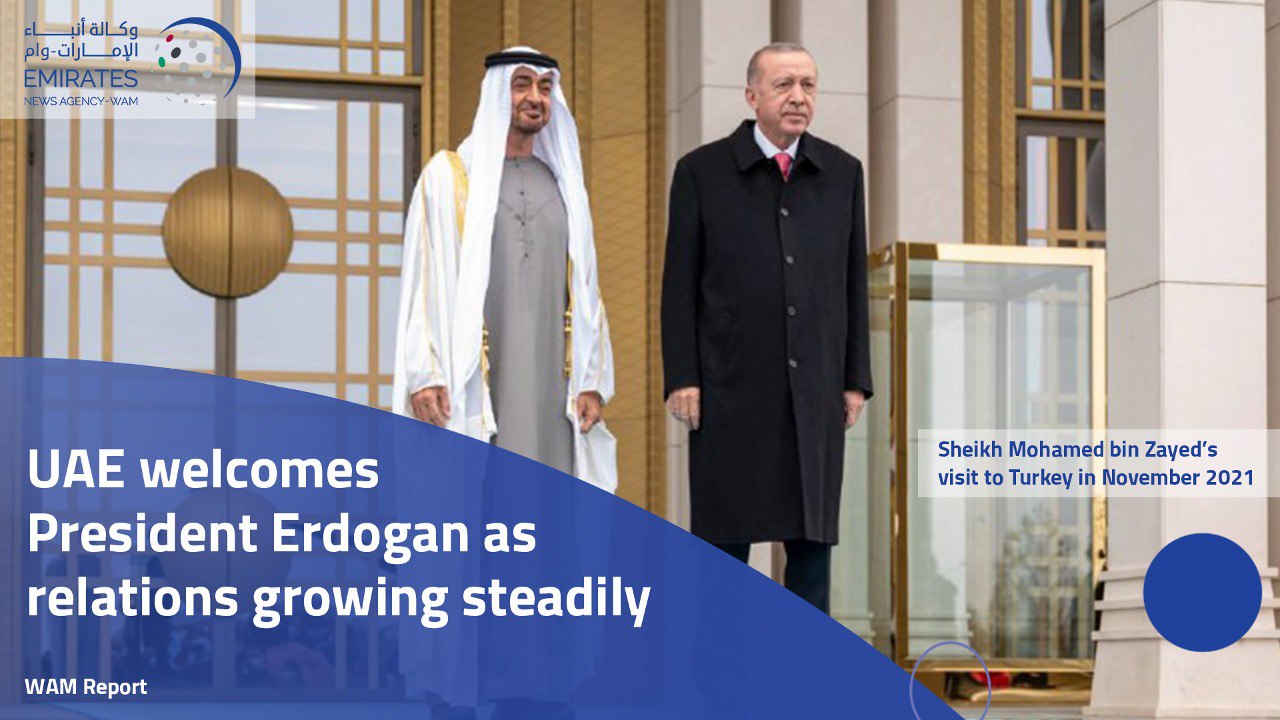 ABU DHABI, 13th February, 2022 (WAM) -- The upcoming visit of President of Turkey, Recep Tayyip Erdogan, to the UAE on Monday reflects a significant step towards enhancing the growing strategic relations between the two regional partners.

The Emirati-Turkish relations witnessed a qualitative leap with the visit of His Highness Sheikh Mohamed bin Zayed Al Nahyan, Crown Prince of Abu Dhabi and Deputy Supreme Commander of the UAE Armed Forces, to Ankara in November 2021, at the invitation of the Turkish President.

The visit marked a landmark step towards strengthening ties between the two countries, revolving around mutual interests.

The relations between the UAE and Turkey are witnessing continuous development in vital sectors, mirroring the keenness of the leadership of the two countries to develop joint work and create more opportunities for cooperation.

The UAE leadership believes that strengthening bilateral ties between the two countries will contribute to regional stability, prosperity and peace.

The economic field is one of the key pillars of the UAE-Turkey cooperation since the establishment of the Arab country.

In 1984, the UAE and Turkey had inked an agreement on economic and technical cooperation, which were followed by other agreements that boosted the economic sector and trade.

The trade volume between the UAE and Turkey in the first half of 2021 stood at more than AED26.4 billion, with a growth leap of 100 percent, compared to the same period in 2020.

The UAE had announced in November 2021 setting up a US$10 billion investment fund in Turkey, which focuses on strategic investments in the energy, health and food sectors.

There are approximately 400 UAE companies in Turkey with the real estate sector topping the list of the country’s investment portfolio. The UAE has also investments in the Turkish ports and banking and tourism sectors.

Turkey is one of the 192 countries participating at Expo 2020 Dubai and its pavilion is situated within the Sustainability District under the slogan "Creating the Future from the Origin of Civilisations."

The UAE welcomes the upcoming visit of the Turkish President through an array of festive manifestations, including a visual display on the Burj Khalifa facade, lighting up a number of landmarks and iconic buildings in the colours of the UAE and Turkey flags, as well as activating electronic panels on the main roads to display celebratory messages reflecting the solid partnership with Ankara.