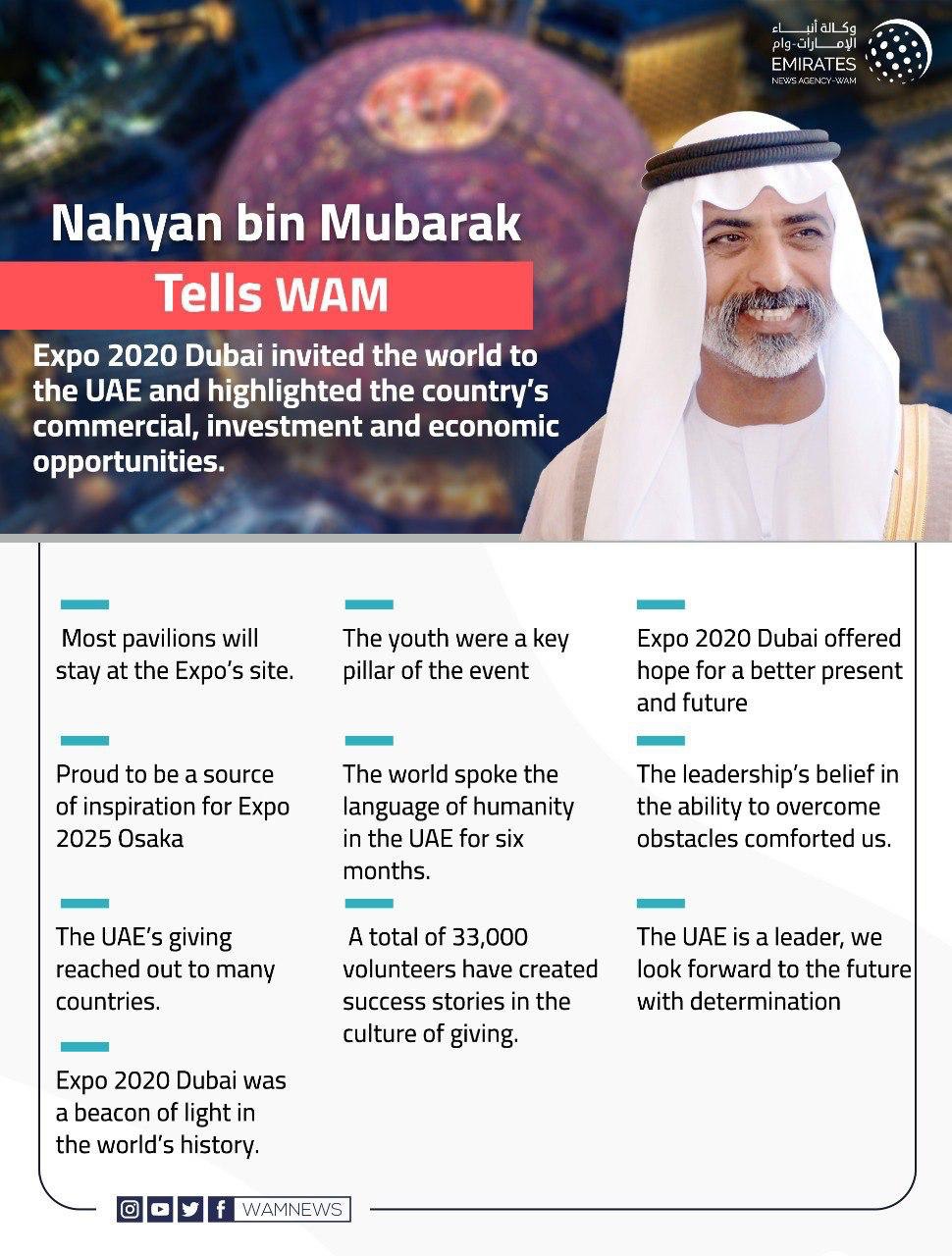 In an interview with the Emirates News Agency (WAM), Sheikh Nahyan stressed that the UAE’s hosting of Expo 2020 Dubai has proven the success of the nation’s journey and approach, supported by the vision of its leadership, adding that the major event attracted the world’s attention to the UAE and the commercial, investment and economic opportunities it offers.

The world spoke the language of humanity in the UAE, a country known for its giving, for six months, and offered hope for a better future, he added, noting that most pavilions will remain standing in the city, and related cultural and academic events will continue.

He also commended the distinguished Emirati model of volunteering at Expo 2020 Dubai, affirming that nearly 33,000 volunteers provided leading services and facilitated the visits of over 24 million guests.

All countries that participated in Expo 2020 Dubai were treated with respect, appreciation and equality, and many celebrated their national days at the event, Sheikh Nahyan said.

The UAE, upon the directives of its wise leadership, believes in possibilities and was established to address challenges and turn them into opportunities, which is the legacy of the late Sheikh Zayed bin Sultan Al Nahyan, he added, stressing that the UAE has successfully overcome the repercussions of the COVID-19 pandemic and organised the most important cultural event in the world.

Speaking about the leading youth empowerment solutions presented by the event, Sheikh Nahyan explained that the youth were the key pillar of Expo 2020 Dubai and a core component of all initiatives, conferences and events held during the event, which represented a platform for the voices of the youth, enabling them to express their views and ambitions and highlight their challenges.

Speaking about the role played by Expo 2020 Dubai in supporting the UAE Vision 2071, by making the country an international hub for attracting ideas and investments, Sheikh Nahyan said the Golden Jubilee's celebrations at Expo 2020 Dubai site have crowned the past fifty years in the history of the UAE, and signalled a promising future for the next fifty years. He highlighted that the Expo has taught the world about the UAE’s leading role in the areas of international politics, culture, the economy and science.

The Expo has gathered the world in the UAE, and thousands of international leaders visited the event, including kings, heads of states, prime ministers, other ministers and high-level officials, he added, highlighting the many investment and commercial opportunities offered by the UAE.

Sheikh Nahyan also talked about the UAE’s cooperation with Japan in hosting Expo 2025 Osaka, repeating the words of the Japanese pavilion’s commissioner-general, who said Japan’s participation in the event was not only about sharing its culture and traditions, but it was inspired by the organisation of Expo 2020 Dubai.

Sheikh Nahyan stated that the UAE welcomed the world at the Expo, ensuring the rights of people and the community to gather in safety, in line with the highest international precautionary standards, adding that the Expo also offered discussions about the major challenges facing humanity and held many activities that aimed to create solutions to these challenges.

During Expo 2020 Dubai, the world explored the UAE’s distinguished model of tolerance, pluralism and diversity, he added, noting that the event hosted Tolerance Week, which witnessed the launch of numerous initiatives, such as the Global Tolerance Alliance launched during the National Tolerance and Coexistence Festival.

Speaking about the UAE’s message to the world during Expo 2020 Dubai, Sheikh Nahyan pointed out that the event took place amidst dire conditions, giving the world a glimpse of hope about what could be achieved if humanity can cooperate and unify their aims and visions.