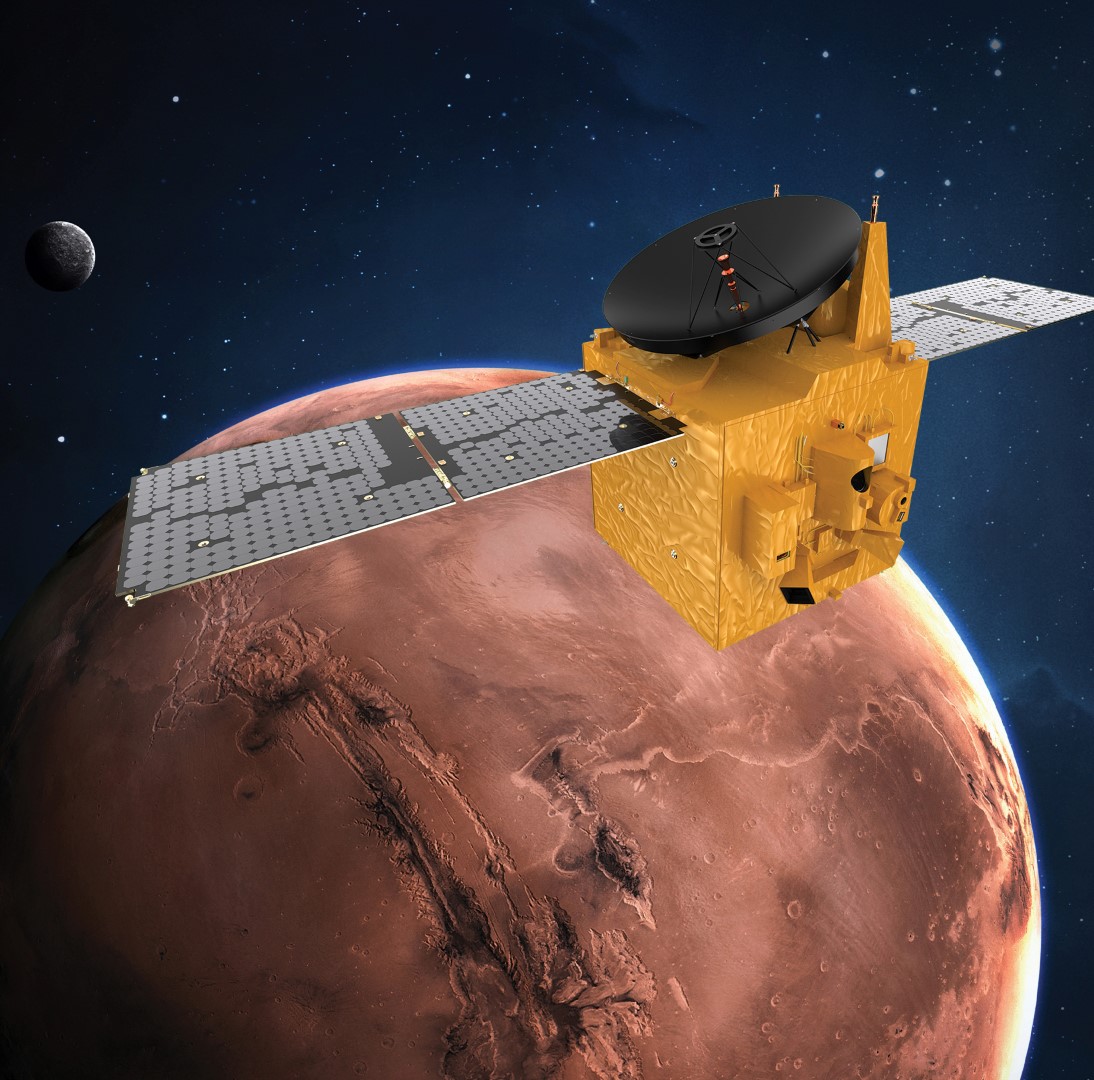 ABU DHABI, 1st July, 2022 (WAM) -- The Emirates Mars Mission ‘Hope Probe’ has identified new observations, in addition to its nominal set of observations, about Mars’ atmosphere in its fourth batch of scientific data.

Collected by the Hope Probe’s instruments during its mission in Mars’ orbit from December 2021 to February 2022, the latest data demonstrate the capabilities of the instruments, and its incredible performance.

With 118.5 gigabytes of information, images, and data captured on the Red Planet’s atmosphere for the fourth batch of data, the new findings bring the total data released by the Hope Probe to 688.5 gigabytes.

The latest released data include new observations from the Emirates Mars Ultraviolet Spectrometer (EMUS) to provide better coverage of the aurora.

The EMUS was also able successfully observe the solar energetic particles and galactic cosmic rays through a detector background monitoring. Also, as part of a detector characterisation experiment, the EMUS observed the ability to operate on higher gain, giving more sensitivity to observations.

The fourth batch of information and data was shared with the scientific community and astronomy enthusiasts from around the world via the data centre on the project’s website, where data is released every three months after the data captured by Probe’s instruments is catalogued and processed by the project’s team.

The first, second and third batches of data received considerable interest by scientists, researchers, experts, and astronomy enthusiasts from around the world. To date, 1.7 terabytes of this data has been downloaded.

Omran Sharaf, Project Director of Emirates Mars Mission, said, "These new observations are a testament to the quality of the Hope Probe in driving key research and insights on Mars and its atmosphere, and we are thrilled to share the latest observations with the global scientific community. As the Probe continues its planned mission to orbit around Mars, we will continue to identify ways in which we can enrich our discoveries and observations to deliver above and beyond our mission, to further enhance the international community’s knowledge and understanding of the Red Planet, and to bolster the UAE’s position in the global space domain."

Hessa Al Matroushi, Emirates Mars Mission Science Lead, said, "The recent coverage from the Mars Hope Probe is a tremendous feat and is evidence of the boundless potential that our instruments have in achieving science beyond what it was design for. The latest insights on Mars and its atmosphere reaffirm that there is much to discover, and we are looking forward to seeing the mission’s objectives of providing useful scientific data, enhancing national capabilities, and fostering global collaboration come to fruition with every new data collected."

The Hope Probe’s orbit, which is between 20,000 and 43,000 km with a 25-degree incline towards Mars, gives it the unique ability to complete one orbit around the planet every 55 hours, capturing comprehensive data every 9 days.

The Hope Probe is studying the current state of Mars’ atmosphere and weather and the reason for the escape of hydrogen and oxygen from its upper atmosphere. In addition, it is studying the relation between the higher and lower atmospheres of Mars and various other phenomena like dust storms, weather variations, and atmosphere dynamics.

The Probe weighs around 1,350 KG, approximately the weight of a small SUV. It was designed and developed by engineers at Mohammed Bin Rashid Space Centre (MBRSC), in cooperation with academic partners including, the Laboratory for Atmospheric and Space Physics (LASP) at the University of Colorado Boulder, the University of Arizona, and the University of California, Berkeley.