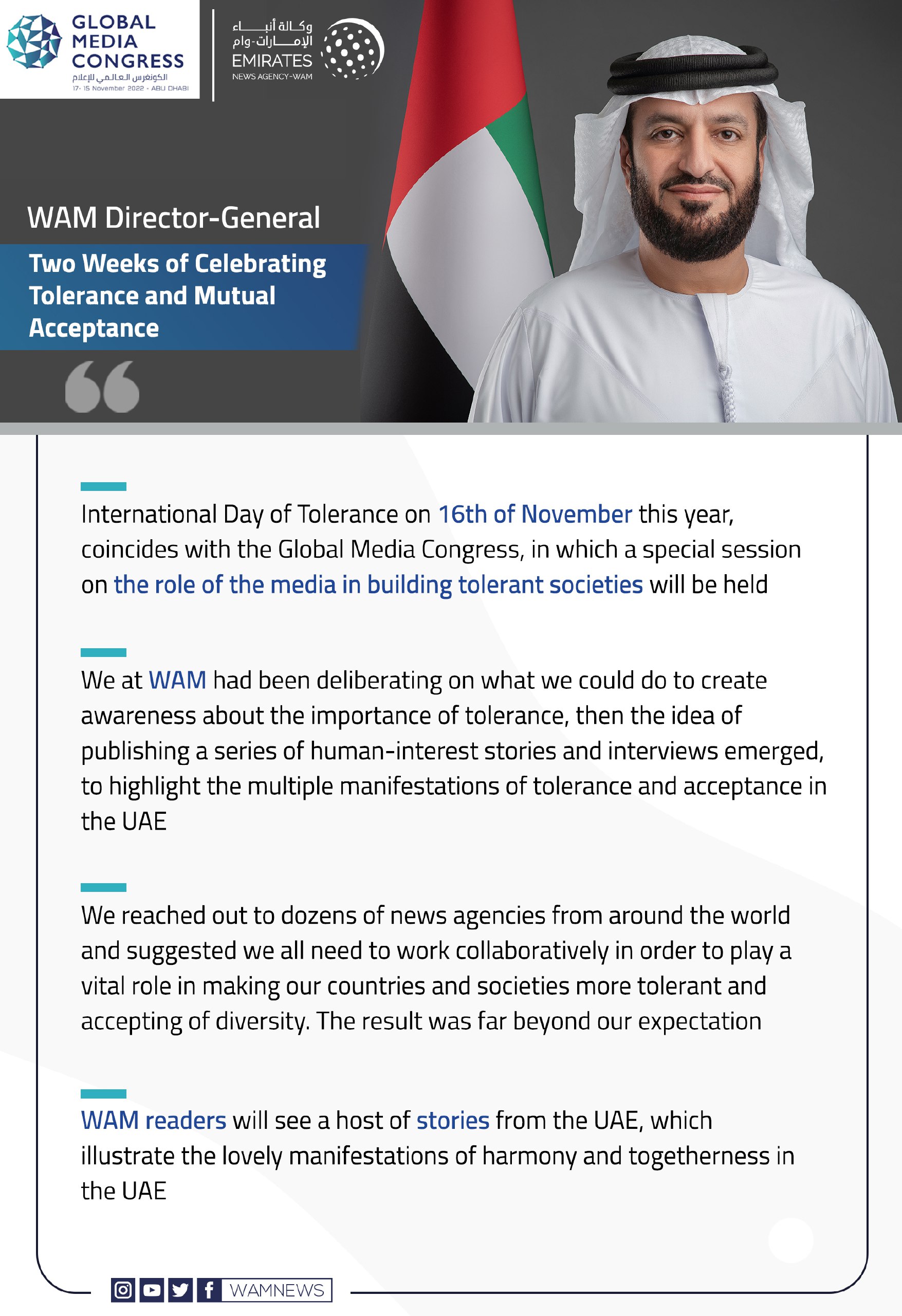 ABU DHABI, 1st November, 2022 (WAM) -- Emirates News Agency (WAM) is launching a campaign to highlight the importance of tolerance and mutual acceptance in multicultural societies. The campaign includes a series of news stories and interviews showcasing the various manifestations of tolerance in the UAE.

The campaign comprises, in addition to this series, a tolerance charter in which a large number of news agencies from around the world would commit themselves to cover issues of tolerance prominently in their news operations. The campaign will culminate in a special session on the role of the media in building tolerant societies at the Global Media Congress (GMC), which will be held from 15th-17th November at the Abu Dhabi National Exhibition Centre.

The series on tolerance will begin appearing on WAM tomorrow, November 2. In the below article, Mohammed Jalal Al Rayssi, Director-General of the Emirates News Agency (WAM) and Chairman of the Higher Organising Committee for the Global Media Congress, explains the vital significance of the campaign and its social relevance in today’s world.

Following is the full text of Al Rayssi's Op-Ed on the occasion.

The International Day of Tolerance will be observed across the world on November 16, 2022. The day coincides with the Global Media Congress, in which a special session on the role of the media in building tolerant societies will be held. We at WAM had been deliberating on what we could do to create awareness about the importance of tolerance. When we internally discussed it, the idea for this campaign emerged. We will publish a series of human-interest stories and interviews in the next couple of weeks, highlighting the multiple manifestations of tolerance and acceptance in the UAE.

Not that the subject is not widely covered in the media, locally and internationally. During the past few years, the media in the UAE and abroad published several fascinating stories about the tolerant culture of the UAE. The visit of the Pope to Abu Dhabi in 2019, the Document on Human Fraternity, The Abrahamic Family House, the announcement of the building of the grand Hindu temple in Abu Dhabi, the recent opening of another Hindu temple in Dubai – these were some of the occasions on which the media showered ample attention on the pluralistic ethos that marked the UAE out as an oasis of harmony and humanism.

When we thought through this campaign, we also felt the need to engage with other news outlets in various countries on the subject. We reached out to dozens of news agencies from around the world and suggested we all need to work collaboratively in order to play a vital role in making our countries and societies more tolerant and accepting of diversity. The result was far beyond our expectation.

A large number of news agencies gladly came forward to sign the ‘tolerance charter’ that we had proposed. The charter was a solemn declaration of willingness and commitment on each signatory’s part to promote tolerance through news stories, interviews, documentaries and so on. Many of them have also agreed to begin paying special attention to this topic right away in their news operations. We were overjoyed. In a world increasingly riven by fissiparous, narrow, and violent ideologies and religious extremism, we believed that the media could definitely play a redemptive role. Instead of always assigning newsiness to stories of hate and division, why can we not turn our journalistic attention to beautiful tales of how multitudes of creeds, cultures and worldviews not only thrive and coexist, but also enrich and bolster each other?

WAM readers will see a host of stories from the UAE, which illustrate the lovely manifestations of harmony and togetherness in the UAE. We are doing this not for patting ourselves on the back, but to bring home the cardinal fact that only harmonious, peaceful and tolerance societies can achieve stability and prosperity. If people representing 200 nationalities chose the UAE as their home (sometimes people say second home, but considering that they spend much of their lifetime here, it is indeed their first and foremost home!), there must be something that pulls them towards this country. The name of that attraction is simple: a culture of harmony and tolerance.

WAM is immensely pleased to present to our readers fascinating stories of harmony and togetherness in the next two weeks. Please honor this space with all the attention it deserves!